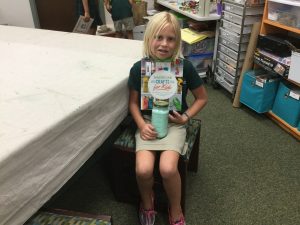 It is all about timing..that is for sure..a few weeks ago I received 2 boxes of new books. I opened them up like a child on Christmas morning and flipped through the pages of some of them. I did not have them in the system yet and had not even paid the invoice. I actually was still taking inventory of the titles and checking them against the enclosed invoice, when one of my second grade classes arrived in the media center for their weekly check out time. I left the job I was doing in my office, and went into the main part of the media center to assist the studens. One of the cutest little girls asks me if I have a book about how to make goo? I was very surprised, since this question was never asked by any student and I also realized that Halloween was over a month away. I initially was at a lost for a book to suggest to her, …but then I suddenly remembered one of the pages I had flipped through a few minutes ago…It was called “Ooey Gooey Slime” and it was in the new selection entitled Mason jar crafts for Kids_ by Linda Braden.

So the student followed me into my office, where I found the new book, showed her the picture and she immediately jumped up and down, and said ,”Yes, yes, yes…that is the book I want to check out…” I explained to her I needed to process it first, and it was ordered to remain in the makerspace, but told her I would copy the pages for this recipe for her. She also asked me to copy the title, so she could tell her mother. In addititon, I promised her she could check it out the following week.
I really thought that was the end of the story. However, when I saw her again on the playground during the week, she quickly informed me she was buying the materials to make the recipe and asked her mother to buy her the book. I also thought that was the end of the story. The next week she came back to check out books and sure enough she asked me if I had the book ready for her. Of course, I took it out of the makerspace and checked it out to her. She hugged that book like it was gold. So now I was sure it was the end of the story. On Thursday, just 2 days after her check out day, I got an e-mail from her teacher asking me if I had time to stop by her room, since this little girl had something to show me. I answered her that I would be there in the afternoon and when I arrived the little girl went to her schoolbag and pulled out her treasure in her glass mason jar. She took my hand and sat me down a table and let me have some of the “goo” she had made…She was so proud and I could not believe how it looked exactly like the picture from the book. She was glowing with excitement and I told her how proud I was of her and how surprised I was that she did this experiment so quickly after receiving the instructions. She said, “I didn’t think you were going to come to my room today” . I told her I would never not keep a promise I had made. She also informed me that she used her own money to purchase her own copy of the book and it was to arrive at her home the next day. I was speechless… Her teacher later told me she kept looking at the door all afternoon waiting for my visit.
This was one of those stories that I needed to share as well as the title of the book. When we change one student’s life in the simplest way it is just amazing…and it all started with a book. I hope all of  you will have stories to share….and make a difference in someone’s life. As Dr. Seuss once said: “Sometimes you will never know the value of a moment until it becomes a memory.”

3 thoughts on “WHAT DO YOU DO…WHEN THEY WANT GOO??”