In the “Should it be STEM or STEAM” debate, no one is a better poster child of how Science and Art complement each other than Leonardo da Vinci. Leonardo’s journals are filled with close observations of nature and the human body, as well as engineering drawings and notes detailing inventions, such as the precursors to the submarine, tank, and machines of the air.

Leonardo’s Journals
Librarian Eve Zehavi will guide fourth graders as they discuss quotes from Leonardo’s journals and look closely at his sketches to determine what Leonardo emphasized about the act of thinking and creating.

These are just some of the questions fourth graders will ponder as they reflect on quotes and sketches. Selecting one of Leonardo’s quotes and relating it to journal sketches, students will write a reflective paragraph using the model of “A Quote Sandwich:”

Bottom Bun
(3) summarize the quote in your own words and connect to meaning of the quote based on sketches and designs in Leonardo’s journals.

Here is a reflective paragraph example that will be shared with students. Color coding shows parts of the “Quote Sandwich” and an image from Leonardo’s journal is selected to match the quote: 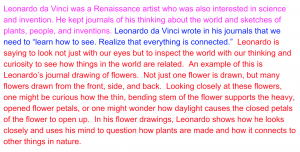 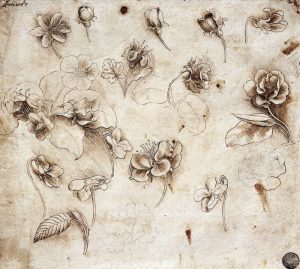 Our sixth graders have been studying the Seven Wonders of the Ancient World and have been reading about the ancient artists and engineers who created them. One ancient artist, Scopas, created a famous scene of Amazons battling Greek soldiers, which appears on columns of the Mausoleum of Halicarnassus.  A history article described Scopas as a “Michelangelo of the Renaissance.”   Discovering this comparison became the impetus to have students compare and contrast this Greek artist’s battle scene with famous battle scenes by Leonardo and Michelangelo.

In one of the most famous painting competitions of the Renaissance, Leonardo and Michelangelo were each challenged to paint a battle scene glorifying the history of Florence. The paintings were to be on opposite walls of the same room of a Florentine republic council chamber. Leonardo was an older, established artist, and Michelangelo was a young, 25-year-old talented sculptor; both artists disliked each other and were very disparaging of each other’s artwork (Isaacson 367).  Author Diane Stanley depicts this painting battle in her two books Leonardo and Michelangelo, and this article from The Guardian will also be shared with our sixth graders.

I collaborated with the history and ELA teachers to develop primary source images and articles so that students can analyze these artworks to discuss comparisons. The history teacher, Cori Beach, will have students connect what they observed earlier in Egyptian art of a Kushite and Nubian battle scenes to the more realistic portrayal of soldiers in battle by the Greek artist Scopas. Donna Baughman, ELA teacher, will guide students to look closely at the artworks and to write in their journals brainstormed action verbs that help describe these battle scenes, such as the following: 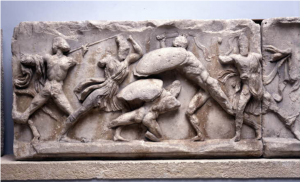 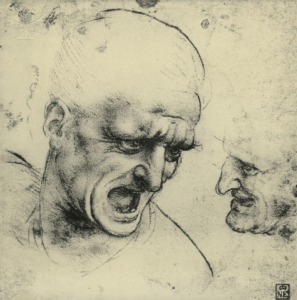 Expressive face of soldier by Leonardo described as “glaring” and “screaming” 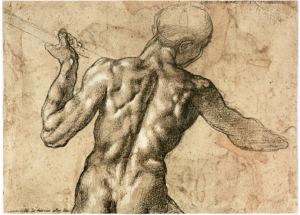 Students will also make a list of transition words and bring these brainstorming journals with them to the writing workshop. Using this structure (adapted from Owl Writing Lab), students will write a comparison/contrast essay during the Writing Workshop with author Diane Stanley:

Looking Closely
We are excited to see how our fourth and sixth graders look closely at primary source images and quotes and connect to “Thinking Like Leonardo” and “Thinking Like Michelangelo” in this Writing Workshop. See below for further Leonardo resources to explore:

Article:
“And the Winner Is…” by Jonathan Jones (discusses the
painting contest between Leonardo and Michangelo)
https://www.theguardian.com/culture/2002/oct/22/artsfeatures.highereducation