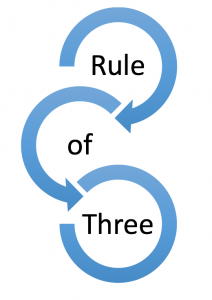 Don’t be mislead by the Mark Twain quote; this article is not a commentary about political elections, but rather, musings on how writers (and poets) make stories memorable. In particular, how does an author create emphasis (humorous or dramatic) and make an idea memorable through choice of language and use of the Rule of Three? And how can librarians invite young readers to look closely for these patterns in poems and stories so that students can create their own memorable storytelling?

I first heard of the Rule of Three while preparing a folk tale in a storytelling workshop hosted by Judith Black (see her Stories Alive website). In an intensive, energetic week, the fledgling storytellers were challenged to create a story and perform it before a group of children.  As workshop attendees paired up to practice our stories for each other, I began a version of the tale, “Why Frog and Snake Cannot Be Friends”: 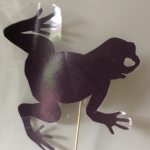 Deep in the forest,
the rain dripped from the
tall tree canopy,
Cascaded over the bromeliads’
long, red leaves,
And pooled around
a tiny, green tree frog.

My listening partner stopped me and said, “You know what you just did? That’s the Rule of Three!”  My partner had experience in writing humorous songs, and comedians often use the Rule of Three to

1) set up a pattern,
2) create a predictable rhythm, and
3) jolt the listener with the third line that contains a twist or surprise.

Sometimes the surprise is created by a very short third line, as in Twain’s quote, “but I repeat myself.”  The surprise can also be created by a contrast in images, such as the tall trees and long leaves of the bromeliads contrasting with the tiny, green tree frog.

I recently shared this idea of The Rule of Three with a class of 5th graders who were writing poems.  Using poems from Insectlopedia by Douglas Florian, I showed how
The Rule of Three pattern could be created by repeating nouns, as in the poem “The Mosquitoes,

or by a sequence of verbs, as in this excerpt from the poem “The Inchworm,”

Or by a string of adjectives, as in this selection from the poem “The Tick.”

In each of these examples, a predictable pattern is created with the first two lines, but the last line is longer and creates a surprising and humorous reflection.

Using more sophisticated examples of The Rule of Three from the book The Death of the Hat: A Brief History of Poetry in 50 Objects, we looked closely at Alfred Lloyd Tennyson’s poem “The Eagle”;  students observed how the poet contrasts the slow river with the powerful might of the eagle:

Finally, we analyzed an excerpt from the poem “Grainfield” by Ibn’Iyad (from the book The Death of the Hat). The poet focuses the attention of the viewer on wheat swaying in the wind and poppies growing in the field; then, the poet uses three phrases to build an analogy and create a new startling image:

This last poem inspired me to write a Nature poem. I combined the Rule of Three with an analogy of a tightrope to describe a spiderweb swaying in the wind:

Fifth and sixth graders, with the guidance of their creative writing teacher, Marian Rosse, composed their own poems, using the Rule of Three to produce a dramatic or humorous effect.  As you read a few samples of their poems, perhaps you will be inspired to experiment with The Rule of Three!

See the fish
Jumping in the lake,
Twisting and turning like shiny acrobats.

Hey, I wonder if I can catch one for dinner!

See the powerful  freight train
Chasing around the track
Like a blackbird
Flying over the shivering leaves of the great woods,
It weaves swiftly around the trees.

The Chase
by Wade

Over the bushes
Around the tree
Through the fountain

Sprinting around the field,  the dog chasing the cat.

The Black Book
by Merry

See the Big Black Book
Holding and storing all treasures, memories from years past,
Hiding in the shelf,
Waiting for me to make more memories.

Like a keepsake box,
I treasure it with great love
The memories it will hold,
Will bring great joy and bring back memories,
To all.

The Book
by Katherine

See the book opened
and waiting to be read
like a person wanting to speak to someone.

The Lava
by Dylan

See the lava burning on the volcanic rock,
like a flame that cannot be put out,
bubbling on top of the destruction it has caused,

Like a fiery demon ready to strike,
consuming everything in sight,
a piece of the sun in rage.

See the wind dancing by the barn,
Like a soft whisper of encouragement,
Lifting the dandelions, the seed heads depart
To begin a new generation.

See the geyser,
spraying its mineral waters into the hot springs
like a humpback whale,
Spouting the freezing Pacific Ocean,
the water is pulled up above into the fluffy clouds.

See the rain
Pouring around the world.
Like unlimited buckets
Of water falling on us,
Creating a wash of water
Falling from the fountains
Of heaven.

Unless you tell someone.
The worries leave,
Say goodbye to those crazy, scary worries.

The Tree
by Logan

Like a Roman Arena with chariot racers competing
beside the roaring crowd on their feet,
the racers compete for glory.

Death of the Hat: A Brief History of Poetry in 50 Objects. Candlewick Press, 2015.

1 thought on “The Rule of Three: Making Stories Memorable”