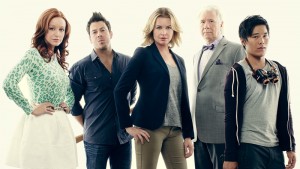 I know – I’m a librarian, I’m supposed to love books. And I do, but . . . I also love TV. I mean it. I looove TV. I watch a lot of TV. Usually I’m reading something at the same time, but nevertheless – I love TV. I will never be one of those people that boasts they haven’t seen a TV show in 20 years because it’s a total wasteland, a mindless pastime designed to sell us Snuggies in between catfights on whatever iteration of the Kardashian show is running at that moment. For anyone who claims that books are always superior to television, I offer up any Harlequin romance novel as evidence to the contrary, and would present virtually anything on BBC, PBS, and the indie film channel in support.

There are, though, some programs that are more entertaining than edifying. Thus, gentle readers, I give to you . . . the first TV review to appear in this blog.

The Librarians airs on TNT at 9 p.m. EST on Sunday nights. It is a spinoff of a trilogy of made-for-TV movies starring Noah Wyle released last year. The gist of it is that the world is full of magical objects, collected in an even more magical place called The Library, and this is under the curatorship of the Librarians (I love that this gets a capital L. Really lends some gravitas, doesn’t it?) These objects include things like the sword Excalibur, Pandora’s box and the lance of Longinus. There is a definite Indiana Jones and The Something of Something flavor, and I’m sure that’s intentional. Also intentional is the hiring of unusually attractive actors as the cast, although I will share something with you: during my other graduate degree program I spent a lot of time working with and around archaeologists. They are all very good-looking. I was quite surprised to discover this, because I assumed Hollywood had filled my head with some fantasy myth of Harrison Ford/Angelina Jolie as Lara Croft and presumed that serious academics would be pasty, myopic and awkward, but every day in class and on dig sites I was surrounded by very handsome, stylish people. So that part’s not fictional, strange as it seems. But plenty of the rest of it is, and I don’t mean “fictional” so much as “straining the limits of credulity.” Among their number, the Librarians count a counter-terrorism expert played by Rebecca Romijn, a genius art historian (hey! That part must be true!) who keeps changing identities, a woman whose sensory hallucinations allow her to “see” whatever magic is in the air, and a fellow who is a master thief and hacker. The magic hallucinator gets a free pass, because that’s fantasy, but who gives the master thief the job of safeguarding precious objects? Fox guarding a henhouse. Not gonna pass the HR screening. Also, who pays these people, and how? Someone’s keeping them in designer clothes, such as the denim jumpsuit Rebecca Romijn wore to take a canoe down a river. Evidently she planned it to be a short, beverage-free excursion.

As a service to you, and to myself, I decided to try and watch them all in a single-day marathon, a luxury of on-demand service. I was deep-cleaning the bedroom and I needed some light companionship, and I don’t know any librarian who could resist an entire TV series called The Librarians, so I pushed “OK” on the remote and away we went.

I am regarded as having a good memory. I could not relate a single plot line to you if there were money or honor riding on it. I have a vague sense that in one episode, some fictional characters in books actually come to life and start wreaking havoc (Moriarty, Dorian Gray) and have to be corralled back into their pages, but other than that and a giant tentacle whacking somebody on the head on a picturesque college campus – nothing. Wait, that’s not true. There was this one short passage of dialogue between two characters desperately trying to get a scrap of information to solve an urgent situation, using “ancient technology,” har.

“Uh, it’s not like this thing has a search engine!”

“Are you telling me you’re a Librarian and you don’t know how to use a card catalog?”

“It’s the twenty-first century! I also don’t know how to shoe a horse!”

Hang onto that, fellow librarians. Every time we are accused of being irrelevant, outmoded, superseded by Google, I want you to remember that somewhere some TV writer thought librarians were fascinating and intrepid enough to go down into Solomon’s Mines or retrieve Judas’ cup from the Last Supper. Are we dusty cardigan-wearing fact-finders fiddling around with databases? No! We are hottie superheroes saving the world from ultimate destruction by the force of our search skills. Watch with me this Sunday night (and forget with me by Monday morning.) I will also be knitting something and petting my cats while I drink tea, but I am glad the world realizes that I could be out there lifting the curse off the Hope Diamond or interviewing the shadow image on the Shroud of Turin instead.

7 thoughts on “The Librarians: A Review”