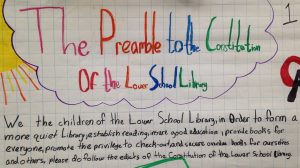 When fifth graders came to the library, I had them write for about 5 minutes about the Preamble: what is it and why is it important?  (Side note: they all acted like they had no idea what I was talking about and then, of course, wrote a few brilliant sentences each in response to the questions.)  We discussed their writing and then I proposed the challenge:

“Students, imagine that the Lower School Library is a brand new country.  We have no guiding principles or laws written down to help our citizens know the rules of our country.  I challenge you, using the Preamble to the Constitution of the United States, to write a Preamble to the Constitution of the Lower School Library.”   In addition, we had a discussion about the purpose of libraries and I gave students a very basic description of what I see as one of the most important roles of the library: to provide books and other library resources to all members of the community.

The students were divided into groups of 3-4 kids and each group was sent to a table with one sheet each of large easel pad paper, scrap paper, pencils, markers, and a copy of the Preamble. With these tools in hand, they put their teamwork skills to work.

Besides one group that gave me some (very clever) sentences trying to impeach President Allison from her role as President of the Lower School Library (that’s not my real title, btw, and I did get them back on track after admiring their gumption), all of the groups wrote marvelously.  These lessons coincided with our Parent Preview tours and many of the prospective parents remarked that the LS Library described by the students would be a wonderful place to work.  I agree. 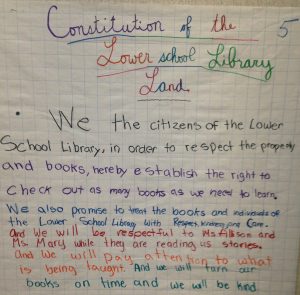 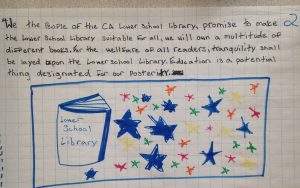 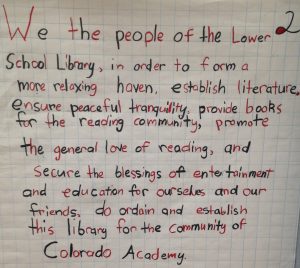 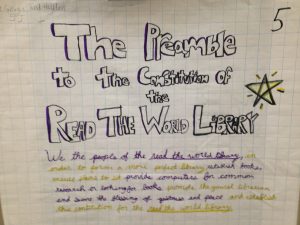