It is mid-May, and in most high school libraries the dust is settling from a flurry of student research.  Perhaps one of the biggest conundrums in high schools is why teenagers, who are so gifted at challenging the status quo, feel befuddled when it comes to arguing a point in a thesis statement.  Part of the fault lies with our tight academic schedules–though we have high aspirations to immerse students in critical thinking, do we provide the time and modeling to aid students in this cognitive jump from summary to analysis?  Our social studies department took up this challenge to reinvigorate research projects with a new emphasis on analyzing primary sources, and the library joined as a collaborative partner in a revitalized role:  modeling for students how to brainstorm with primary sources first to develop their thesis statements and chart a path for exploration.  A brief description of the modeling lesson follows. 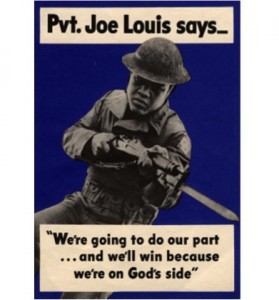 Tenth graders at Pope John Paul II High School began their World War II research by looking at propaganda posters to determine attitudes about their war topics. Using this poster of Pvt. Joe Louis, students were asked to name everything they observed in the poster (both image and wording) and then to reflect on why the image was made—what was the message and who was the audience.  A  Primary Source Analysis Tool (created by Library of Congress and Teaching with Primary Sources (TPS)) aided the class brainstorming: 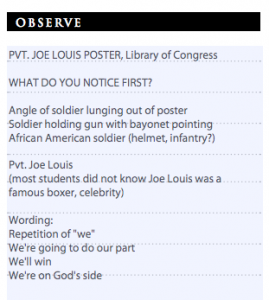 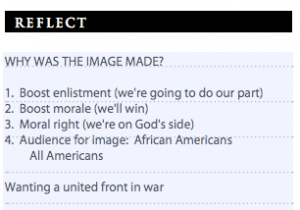 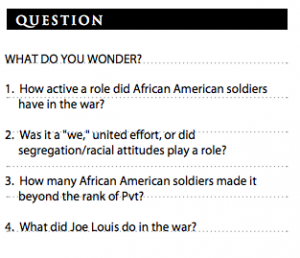 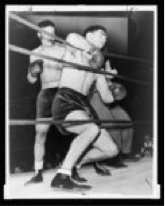 Students made the observation that just as Max Schmeling was used as a propaganda tool to rally support of Nazism, Joe Louis was used to promote America’s united war effort. Here is a suggested analysis paragraph and thesis: 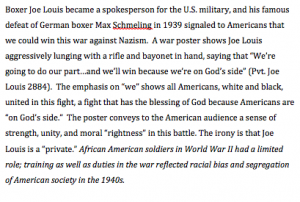 Students then discussed the types of evidence they would explore to support the thesis argument of “limited training” and “limited duties” reflecting racial bias and segregation. 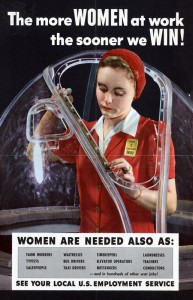 After this “research modeling” exercise, students   explored their own research topics with primary source images. Students used Britannica Image Quest and the search terms World War II posters (plus the name of their topic) to find posters for brainstorming.  The following image and primary source analysis tool illustrates how one student developed her thesis on the role women played in World War II and how it affected women’s social status: 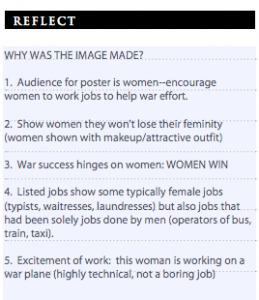 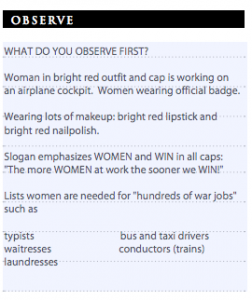 Based on this student’s brainstorming, she researched next women’s working conditions in a US government pamphlet, Safety Clothing for Women in Industry, and employer attitudes in a pamphlet When You Hire Women.  She then investigated health hazards at Oak Ridge in the book Girls of Atomic City. These sources supported her developing thesis:  Women on the home front showed that they could rise to the occasion by contributing to the war effort, and their efforts helped to better their social status; however, some jobs they performed caused health risks and for some women the rise in social status was momentary.

The exciting aspect of this method of thesis creation is that students build insightful arguments generated by close observation of primary sources.  Author DeSena stresses this approach in her book Preventing Plagiarism, suggesting that allowing students opportunities to brainstorm with primary sources first will also eliminate the risks of plagiarism: “If you take exploration of self out of the research process, you limit your students to reporting.  Exploration involves questioning, challenging, testing, not merely absorbing information.” Students are not just assembling a “Wikipedia” of facts about their topic but instead are building arguments and sharing insights about their topics.

Interested in using primary sources to create thesis statements?  See my LibGuide Teaching with Primary Sources for more resources from Library of Congress’s American Memory and TPS, as well as a clever video from Stanford University’s Beyond the Bubble, which describes alternative assessments for history.

Please use this AISL blog to share your comments and success stories on how to improve student research and critical thinking.