“History is more than war and politics; it is literature, the arts, engineering…above all, history is human.” 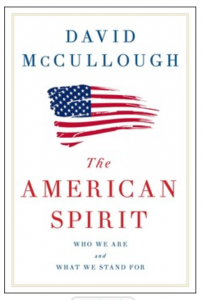 This quote is a constant refrain in David McCullough’s recent book, The American Spirit: Who We Are and What We Stand For, which is a collection of lectures he gave on the importance of developing connections to history.

His commencement addresses often close with a plea for graduates to read and learn about the history of their country.  Several years ago, I attended a lecture by McCullough at Belmont University in Nashville, Tennessee, and he mentioned that one of the best ways for families to encourage a love of history is to visit and walk historic sites with their children.

Taking to heart McCullough’s emphasis on encouraging reading and learning about our human history, I would like to suggest a few pairings of books with history museums that you might visit.  The list is far from comprehensive; it would be wonderful to expand this list with suggestions of your favorite books and museums.

City Museum
St. Louis, Mo.
This museum has to be seen to be believed.  Started by a salvager who did not wish to discard the beautiful history of St. Louis, the museum took shape as local artisans created an artistic, interactive environment of salvaged history.
Book to Pair:
The Seventh Most Important Thing by Shelley Pearsall
When forced to complete community service hours with a junk man, a young boy discovers the beauty of this junk through the man’s artistic creation.

Gettysburg National Military Park
Pennsylvania
Book to Pair:
The Killer Angels by Michael Shaara
Shaara’s son, Jeff Shaara, continued the Civil War sagas. Jeff recounted in a lecture that as a boy he toured Gettysburg on several occasions with his father—his father talked as they walked the battlefield, imaginatively plotting what would become the classic Civil War story.

Lower East Side Tenement Museum
New York
A museum dedicated to understanding the daily life and struggles of immigrants
who came to America for new opportunities.
Books to Pair:
A Tree Grows in Brooklyn by Betty Smith
Francie Nolan and her Irish-American family struggle with poverty, but their lives are rich in their love for each other.

Peabody Essex Museum (Historic Homes Tour)
Salem, Massachusetts
The historic homes tour provides insight into how early colonists viewed the New World, an environment that was often perceived as dangerous.
Book to Pair:
All the Truth That’s In Me by Julie Berry
Though the location of the village is never mentioned in this book, this Edgar-winning novel is described as Speak meets The Scarlet Letter.

The National Civil Rights Museum at the Lorraine Hotel
Memphis, Tennessee
The site of Martin Luther King’s assassination, this museum combines a timeline of civil rights events, primary sources, oral histories, and a burned-out bus to dramatize the danger faced by the freedom riders. Visitors even can walk near the balcony where King was assassinated.
Book to Pair:
March: Book 2 by John Lewis
Congressman Lewis recounts how the Freedom Riders boarded buses headed to the South to challenge racial desegregation laws.  Their efforts were met with violence.

Chinese-American History Museum
San Francisco, California
Book to Pair:
Bubonic Panic:  When Plague Invaded America
The Chinese Exclusion Act and the San Francisco Earthquake and Fire are some of the events as this epidemic unfolds.  Good tie-in for STEM and wonderful incorporation of primary sources.

Field Museum of Natural History
Chicago, Illinois
A naturalist’s dream, this museum shows fossils, skeletal remains, and dioramas of life as it evolved.
Book to Pair:
The Lie Tree by Frances Hardinge
Gothic thriller set in Victorian Age when the Theory of Evolution inspired fossil hunting “wars” as well as animosity from religious fronts who saw Darwin’s theory as negating the bible.  Central to the plot is the young daughter, Faith, who aspires to be a naturalist like her father, but who is constrained by social conventions of her period.