School Library Programming is as unique as each librarian and learning community. One popular program in my suite is the Library Lunch Club(s).

I am on a fixed PK to Grade 5 schedule for just over 190 students. During the seven day rotation, I see PK for 30 minutes, K and 1 for 40 minutes per section and grades 2 through 5 for one hour per section. I also additionally schedule co-teaching and extra library time during research season. This schedule allows ample time for curriculum as well as reader’s advisory.

I have been offering Lunch Clubs since my first year here in 2017. I had an eager bunch of 5th graders that year – strong readers and active library users – this got me thinking about expanding programming.

Lunch Clubs were born! My schedule is such that offering 2 lunchtime clubs in the library during the 7 day rotation felt manageable.

I chose activities that I knew all of us would be able to dig into reasonably during the lunch hour. During all of these clubs, we talk books, laugh a lot, watch related videos, create original content and find community in our love for books, stories and sharing.

Lunch Clubs are here to stay. I really enjoy providing a unique time and space to explore the books and topics they love, while they enjoy creative expression. Please share one of your unique library programs in the comments below!

When talking books with a group of seniors before winter break, one of the girls said, “My friends don’t think that I’m a reader, but I actually read all the time! It’s Fanfiction. They don’t think that counts, but it totally does! I read hundreds of pages a week, actually.”

Apparently, I have been living under a rock.

O.k. so maybe not completely under a rock. I have heard tale of certain infamous Twilight Fanfiction that came in various shades of…poorly written mega-bestselling material. But the Fanfic this student was referring to, and that of which her group of friends began passionately extolling on, was not about that  business. It’s an entire world…a world made of fandoms. Have you seen sites like this?

They LOVE IT. In our five minute conversation, I heard about story lines inspired by characters from books, television series, and video games. I heard that some of it is poorly written, some is gratuitous R rated material that they deem me too young and innocent to read :), but according to these girls, some of it is really, really good (and addictive). They’re reading. A lot.  And some of them are contributing their writing. I want to know more. Quite honestly, I want to know about what they’re reading, from comics to the Classics.  If I try their suggestions, I feel like they will be more open to trying mine.

Discuss it as a community. If this group of five is this into it, who else can contribute to the conversation?

Encourage them to create some of their own?

After reading this School Library Journal  Guest Post by Christopher Shamburg… When the Lit Hits the Fan in Teacher Education, I’ve decided to add a unit on Fanfiction this week in my senior English elective (I blogged about this class last year). However,  I think it’s something that we could all do as librarians. Perhaps an all school program, a collaboration with your English department, a fun activity for your book club, or an after school activity?

Per Shamburg’s recommendation, I’ve done a bit of research into the history of Fanfiction. I can’t wait to talk to my students about Shakespeare in particular. And then there’s Fanfiction of biblical proportions. “Paradise Lost” anyone? This could (and is) an entire course at universities. Lacking a degree in literature, I know that will touch on the proverbial tip of the iceberg, but I think that it will be a fun way to engage with texts in a new way.

I’m looking forward to hearing what influences my students have noticed in works that they have read. I read March by Geraldine Brooks years ago and liked it, yet I didn’t know the word “Fanfiction” then. I just thought, “Men are From Mars, Women Are From Venus, Little Women style”. 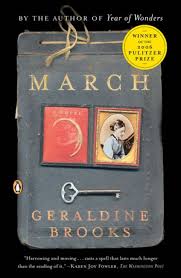 Think about these Fanfic writing prompts (offered again by Shamburg):

·      Alternate Perspective—the story is told from the point of view of another character. For example, what would the Cinderella story be like if the stepmother told it? (Or maybe the father from Little Women?)

·      Missing Scenes—scenes that are not in the original story, but would make sense in it.

·      Alternate Universe—a major character or event in a story is changed, and a “What If…” scenario ensues.

·      Alternate Realities—characters from one story enter the world of another story.

·      Sequels—the story that happens after the original story.

·      Prequels—the story before the original story.

·      Self Insert—the story is rewritten with an avatar (representation of the author). For example, what would a Harry Potter adventure be like if you were in the story?

I’m going to ask them to choose one of the above scenarios, to adopt their author’s tone and writing style as much as possible, and to add a Fanfic chapter to their story. I might even ask them to weave together all four books that they read throughout the semester for a final creative writing exercise. How fun would that be ?!

Are any of you members of a Fandom that you’d care to share?

Is anyone doing anything with Fanfiction at school? If so, I would love to hear about it. Please use the comment section to share your ideas with us all!