Taking a Step Back: Assessing needs after four years in a new space

Four years ago, our school completed a huge construction and renovation project. The Middle School Library moved into a newly constructed space almost twice the size of our old one. I was asked to take an active role in designing the new space, and I relished the idea of flexing my library design muscles.

Here we are, almost four years later, and the time has come to assess how we’re doing. For now, I’m focusing on the space itself, not the collection or programming or any other matter.

Some parameters were placed on us when we moved into this space, the most difficult of which was that we could not tack anything up on the walls nor could we cover the glass in any way. This left us with very little usable wall space, as a good percentage of the walls are floor-to-ceiling glass windows. In addition, the library’s décor and furniture choices were undertaken by an interior designer, so the only input I had was in asking that the chairs and tables be moveable for flexible seating arrangements. The paper mâché tree, flying book lights, and “space chairs” give the space those extra elements that make it exciting yet child-friendly.

I wrote a grant proposal for the construction of a 10 ft. x 10 ft. Lego wall, and a parent gave the library a generous gift so we could make one of the rooms around the periphery into a green screen room. The students enjoy the Lego wall, but I need to come up with some ways to utilize it more with the middle school students.

Our green screen room is the only one in the school, and it is used on a daily basis by kids in both the middle and upper schools. It’s a small space that was originally intended to be a conference room, so it has windows and a glass door. Not particularly good for a green screen room, but we’ve worked around these issues. Things took off in there when we decided to paint an entire wall apple green rather than hang a green piece of cloth. Scheduling time in the green screen room is complicated, and because it’s the room that’s furthest from the circulation desk, it tends to get messy in there. But it’s working.

The other rooms around the perimeter of the main space include an office, a conference room with a folding wall to convert it into two rooms, 2 reading/relaxing areas, and a workroom for faculty with a sink. We also have two large spaces for tables and chairs where entire classes can meet.

Thanks to all of the glass, the library fills with natural light throughout the day, which is beautiful, but it makes it difficult to heat and cool the space properly. Because everyone loves the library, school events are held in here often. This means that we have come in some mornings to leftover food and event set-ups that haven’t been broken down. Another issue we have is that the Upper School Library next door is often crowded, so upper school students often come in to use any quiet rooms we have available to study. Middle school students have priority over the upper school students when it comes to space utilization, but it can be difficult to monitor the behavior of the older students when they’re in our space.

The library is a wonderful, welcoming space. Our circulation desk is huge and allows us to comfortably assist patrons. Very little of the library’s square footage is underutilized. In fact, I’d say that we will be bursting at the seams before we know it. When we opened four years ago, our stacks were a good size for our print collection. Now, though, it looks like we’re going to need a new shelf unit soon, unless we do some serious weeding later this year. Adding another shelf unit would seriously impact the space, and I’d like to avoid that as long as possible.

I realize that all of our space problems are good problems to have. I’m thankful that the architects asked for our librarian input when the library was being designed because we knew what we needed and what would work well for the middle school. We love our library and know we can be comfortable here for years to come.

This was my first year to manage a library budget completely on my own. I had a relatively healthy budget (you can always use more, right? :)) but at the same time, I knew that I had a ton of work to do to bring the library up to speed–new website, databases to add, purchasing EZProxy, Libguides, and oh yes, books! We needed print, eBooks, $1,000 in textbooks to complete the reserve collection, not to mention replacing a scarily amazing VHS collection with DVDs. I was like a first timer on safari, treading through tall grass…looking about wildly with each PO I filed and Visa bill that arrived, just waiting for May to come and some tiger…I mean, some annual renewal fee to jump out and bite me.

I proceeded with caution through Spring Break. May came. I looked around. I’d made it. Better yet, I had money left over. WHAT?!? <insert raise the roof interlude here>

Before the July 1 deadline, I decided to make some high impact physical changes to get my students’ attention, to improve the ambiance and technological usability of the library, and quite honestly,  to attempt to set us apart even more so from other student lounge/study areas around campus to improve marketability.

Here are some before and after shots of my strategy this summer (click on images to zoom in): 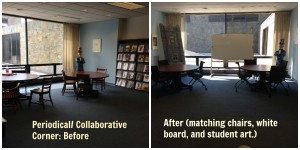 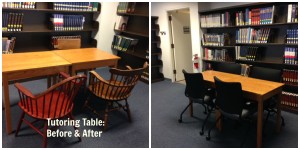 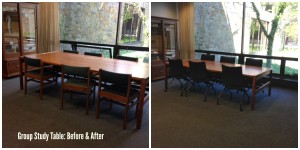 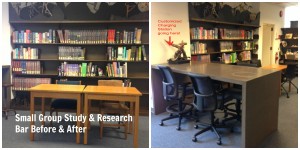 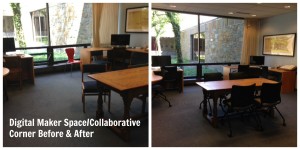 Since I began last August, I have done an inward cringe each morning when I walked in to see all the mismatched chairs and furniture. It felt like my college apartment, like a garage sale treasure hunt gone horribly, horribly wrong. Thankfully, I had enough budget to swing for new chairs. I went for the super comfy Hon chair with arms that flow down for easy push up to tables of varying heights and seats that flip up like auditorium seats for easy stacking away if/when the library hosts events and needs to be more open. Cost for 33 chairs, 4 bar stools, and unbelievably expensive delivery and installation along with lifetime warranty: $8900.

I ordered 4 bar stool versions of the chairs to be used at our Research bar. I’m hoping to house the student tech support group this year and will give them a desk right behind the research bar. *Note, the research bar is just a high table in the reference section where kids can bring laptops to do work. We’re also adding a customized wall mounted charging station by the research bar so that students can charge while they study. Cost: $400.

How to add power to a 1960’s building without everyone falling over power strip cords? Retrofit existing tables with outlets/ports. I am lucky enough to have an amazingly tech savvy department chair who has a PhD in Civil Engineering…she is going to bring a saw and is going to retrofit the two round tables in the periodical corner with outlets and charging stations. Most facilities departments have an electrical specialist–this person could do this. Each table will have one cord that goes to the wall with a plastic strip covering to avoid trips.  Total cost $850.

Disclaimer: notice that I said “Gap budget” and not “Old Navy”, or better yet, “Goodwill”–how good would that be for the wallet and for the alliteration factor? These projects do add up, but if your space is as dated as mine and if your goal is to add features that aren’t readily available in other study centers around campus, maybe you will consider adding one or two? If you’re lucky enough to have matching furniture, well then good on ya. You’re already on your way to a high impact space that is not only usable, but a highlight of school tours.

What other low cost, high impact, physical changes might you suggest for the rest of us?

Wishing everyone an AMAZING start to your school year! Can’t wait to hear about all the cool things you have planned.