Cue #stressbusters – daily offerings at a large table just inside our Library doors at Trinity College School (in Port Hope, Ontario). From Monday to Friday, we set up before first period and ran through until sports began at 4pm. As expected, it was busiest during morning break, both lunch periods and after school. Those with spare periods enjoyed the excuse to procrastinate. We chose activities based on ease of preparation and potential appeal to Gr 9-12 students. 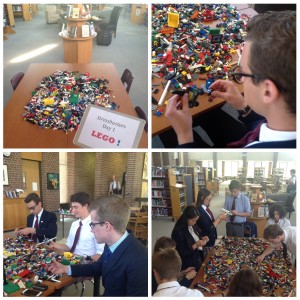 No big surprised that this was a huge hit, with boys in particular. I brought my son’s Lego into school, but wouldn’t have had trouble finding some to borrow. Two highlights were having teachers join in, and seeing the notes left with finished pieces – “Sam’s Lego ship. Don’t wreck!” (Note: Sam is 18 years old 🙂 ) 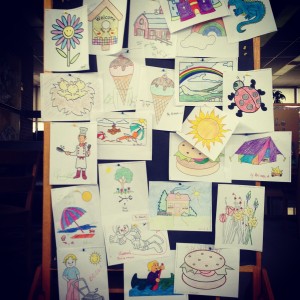 The gender divide continued – this was very big with our girls, who spent much time ensuring that their colouring was spot on. Kudos to the Gr 10 boys who joined in and posted his finished pieces on some friends’ lockers to ‘spread some sunshine’. 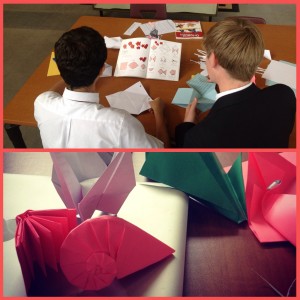 We were fortunate to have two experienced students happy to come in and be available to those interested in learning how to do some creative folding. We also put origami books from our collection out for use. This was definitely the most demanding stressbuster offered…..

This initiative was the result of a request from TARA (our student group focused on animal welfare), which wanted to offer a ‘puppy room’ during exams, similar to programs being offered at some university libraries. Due to concerns raised, we ultimately decided to go with St John Ambulance Therapy Dogs. While not the raucous event they originally envisioned, the kids were delighted with Lucy (King Cavalier Spaniel) and Emma (Golden Lab) and their friendly and informative owners. We held the visit in our school’s outdoor courtyard, so it was highly visible and 40-50 kids stopped by for a pet and cuddle over the course of an hour. 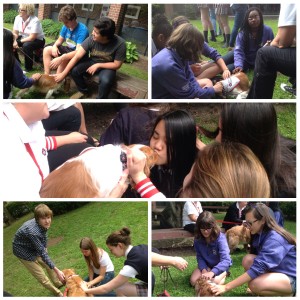 Day 5 – Build your own blanket fort

With thanks to Caroline Bartels at Horace Mann for the inspiration, Friday was design and construction in action. We found it interesting (but again, not surprising), that it was mostly Gr 9 & 10 students (both boys and girls) who loved moving furniture and creating forts. However, once built, the Gr 11 & 12 students were very happy to hang out in them, reading or studying and in some cases,  criticizing and correcting any design flaws. We borrowed the blankets from our Housekeeping department which saved us from having to lug them in from home. 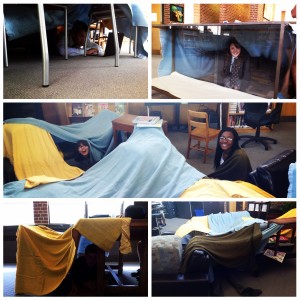 Overall, we were pleased with how this last-minute programming went. It required little preparation and no additional expense: we used existing supplies or borrowed resources when necessary. Advertising came in the form of one formal chapel announcement, daily postings on Twitter and Instagram (using the #stressbusters hashtag) and signs posted outside the Library. By Tuesday, kids knew to stop by and see what was happening each day. Our school was very supportive, posting a photo essay on our school Facebook page and running and article in our weekly newletter.

Feedback from the kids was so great that we threw in a (loud but satisfying) bonus round the day before exams began – bubble-wrapped handrails leading up to the Library – which proved so popular we had to refresh the bubble-wrap throughout the day! 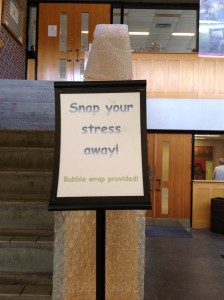