It’s nearly Halloween, a holiday I greet with a delight other people reserve for Christmas eve. As such, ‘tis the season for costumes and my mind turns to the subject of dress in general: what we wear on the outside is so often a reflection of how we feel on the inside, or rather, how we ought to feel or hope that others perceive how we feel.

I’m a librarian. You’re a librarian too, or are library-oriented, let’s say. As such, you are no doubt acquainted with the standard Hollywood shorthand for “Librarian”: tweed skirt, white blouse, pearl necklace, horn-rimmed glasses, up-do, clickety-clack high-heeled shoes. I have no idea what the male equivalent is, but I’m imagining it involves a sweater vest. And then there’s the inevitable variation, Fantasy Librarian: tight tweed skirt, low-cut white blouse, just-woke-up up-do, very high-heeled shoes, et cetera. (Gentlemen, do they make low-cut sweater vests?)

I don’t dress like that, and neither do you. I have dressed like a lot of other things, but not that. At ODA we have a firmly established tradition of costumes for occasions throughout the year. During the week leading up to Homecoming, there are theme days of every stripe: Sports Day; Mythology Day; Pajama Day; Disney Character Day; Opposite Day; 70s Day; 80s Day; 90s Day. For a yearly event signaling there are 100 days left before the seniors graduate, we have a dinner with speeches, again all in themed costumes. There’s Halloween. There are days when we wear school colors, days on which we are encouraged to look like Walking Dead characters to support the science department’s zombie-related day-long project in the fall, and so on. Thus in the eight years I have been here, I have been Princess Jasmine three times: dressed as myself during high school four or five times: and been a Hindu goddess at least once. I did actually come to school in a tweed skirt/eyeglasses/up-do combination one time for Nerd Day, but no one recognized it was a costume, to my crushing disappointment. 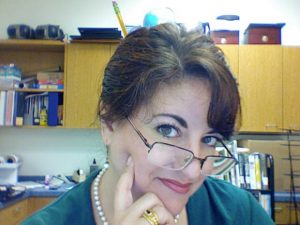 It’s not that I wouldn’t like to wear a nice skirt, pretty blouse and some fancy shoes, it’s that I can’t. We can’t – I’m speaking for you here. Frankly I’d rather be here at this desk looking like Juliette Binoche from Chocolat, but it’s not practical. Librarianship is way more physical than people envision. We all bemoan the fact that no one seems to understand what librarians really do, and as cerebral as its reputation may be, there is absolutely a physical component that most of the laity don’t recognize. Some of us have assistants, student helpers and staff members in our libraries, but many of us are solo practitioners and outside of Madam Pince, Hogwarts’ librarian, our books don’t shelve themselves, do they? Tight skirt means no bending over, white blouse is going to be dusty by mid-day, and forget those shoes. It’s flats all the way up on that library stool, or squatting down to retrieve a lost book, or chasing across campus to the next bibliography workshop.

But it’s not all grimness and drudgery! Many librarians have real style, it’s just not the style the general public expects. Need proof? Take a look at us bloggers! What I’ve noticed almost universally amongst this group of which I am proud to be a member is that we all seem to wear pretty sensible shoes, our hairstyles are flattering but low-maintenance, and it’s in our accessories that we take the greatest pride of expression: lots of canvas bags with clever sayings and craft-show jewelry. By way of market research last year I requested photos of my AISL pals from across the land, and in the interest of preserving privacy have elected not to post them all here, but: I’m right – virtually every single shot shows someone who is dressed stylishly but ready for whatever mayhem befalls her, with a little dash of personality at the earlobes.

I’m inviting you to post your best Library Look right here in the comments (men are especially encouraged!), and maybe we can start a movement in which Hollywood portrays “Librarian” correctly. I’m not enraged about this – it isn’t a rant piece; I’m just putting a call out there to my peeps to correct some assumptions about how to recognize us in the wild, so to speak. 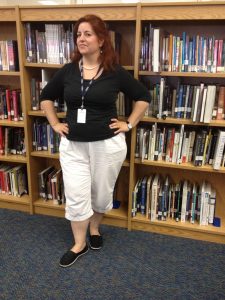