A summer conference session on iBooks at Lausanne Learning Institute inspired a collaborative challenge between our high school library and Chelsy Hooper, the technology integrator of a middle school: How could students at Pope John Paul II High School creatively teach a 6th grade Latin class at Ensworth Middle using the multimodal tools in iBook Author? This article shows a glimpse of the creative process and reflects on students as entrepreneurs who became writers, designers, and teachers– thereby putting the I, their innovations, in iBooks.

Pitching the idea
In a brainstorming session with our high school Latin teacher, Bozena Lawson, I suggested using the city of Pompeii and the dramatic event of the eruption of Mount Vesuvius as the theme of the book. The book Ashen Sky, illustrated by Barry Moser, showed how we might combine the writings of Ancient Romans to highlight culture and events of Pompeii.  I created a few sample iBook pages to demonstrate dynamic features of the iBook, such as scrolling gallery view of images, target widgets (close up view and text boxes as you click on areas of an image), and a sample embedded video about the eruption. See Mount Vesuvius video and following screenshot of Memento Mori page and puzzle widget. 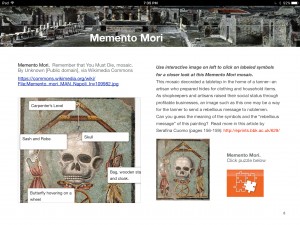 This sample iBook was shown to all of the Latin students and interested students were invited to attend a brainstorming luncheon. At the luncheon, students viewed curriculum standards for 6th grade Latin and suggested topics that interested them. Three teams (of two students each) emerged:

Screenshot below shows Contents page. Bottom shows individual pages that can be selected and expanded for view. (Note that interactivity of book pages can be previewed through iBooks Author on a Mac or exported to view as a PDF.) 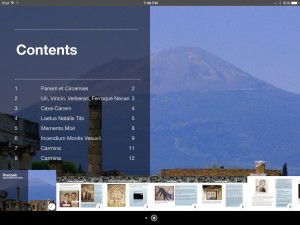 Looking Closely at Primary Sources
The three student teams arranged times to meet outside of class and researched facts, but each team was challenged to find primary source images and identify writings of ancient Romans to add depth to their understanding of Roman life. Students used the Loeb Classical Library for primary source writings.

Team One: Two girls found a serendipitous pairing of ideas: one student was fascinated by altars in the home while the other student discovered a poem by Ovid, written while in exile, that solicited the “birthday god” and mentioned ceremonial altar practices. They developed a chapter on Lares et Penates (household gods of protection).

Engage with Activities. As the iBook was shared in Latin classes, students engaged in following activities:

Team Two: Both of the boys had a flair for the dramatic and a fascination for gladiator games. Dressed in togas, they supplied a spirited play-by-play account of unfolding action at a gladiator game—a 59 A.D. Pompeii game that ended in a riot (and deaths) among the spectators of the rival gladiator teams. Students used writings of Juvenal to describe political meaning behind the phrase “Panem et Circenses” (Bread and Circuses).
See Gladiator Riot screencast video on LibGuide. 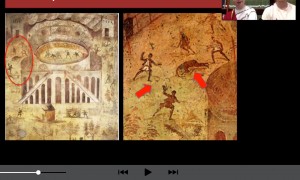 Team Three: The boy and girl in this team were both students in our Earth Systems class, so they investigated the science behind the eruption of Mount Vesuvius and detailed the three characteristics of this devastating volcano eruption using the first-hand account of Pliny the Younger. View screen cast video of Mount Vesuvius eruption on LibGuide. 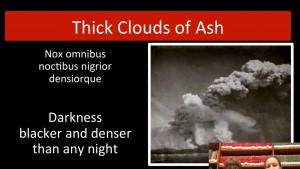 The final portion of the iBook highlighted poems written by Latin students. Since each of these poems was inspired by a Latin phrase (motto) or mythological character, an extension activity invites students to choose one of the mottoes presented in the book or a mythological character to write their own poem.

Multimodal Learning
The Latin iBook project explored mulitmodal learning (aural, visual, gestural, spatial, and linguistic elements). I encourage you to read Writer/Designer: A Guide to Making Multimodal Projects to learn more about incorporating diverse learning in your own projects. Wishing you success as you explore student publications. Please share comments of creative projects.

A brief word on respecting copyright with iBook publications: we used Wikimedia Commons public domain images and rights-cleared images from Britannica Image Quest.  However, a fuller copyright discussion will be presented in future AISL blogs.

1 thought on “Putting the “I” in Books: Students Innovating iBooks”