In my last year of library school, I did my teaching internship hours with a librarian who traveled between schools for adjudicated youth. There were lots of limitations on these schools, some of which included no scissors, hardback books, a collection of books let alone a room dedicated to it (or a room without asbestos in it). I’d done library service in jails, but this was something different. One of the days I spent with shadowing the librarian, we did origami with a group of older middle schoolers. The young man I sat beside was decidedly not into paper art. After every fold, he refused to continue. I’d encourage as I stumbled my way through the activity, too. But, then he would the next step. Each argued fold turned into a crane. On the subway home, in the paper for the semester, in the years that have followed I have thought of that interaction and what it taught me, all of which can be summed up in a slogan a teacher I loved taught: “I love you, keep going.”

On the Friday leading into spring break, a half-day, all the 1st-4th graders spend in the library. They spread out on towels and read silently or listen to a storyteller. It is a well-loved tradition, no matter if the mechanics of the day sometimes shift in big (the annual big/little Easter Egg hunt bifurcating the day) or small ways (the mobile zoo instead of a storyteller). So, this year we read, watched an episode of Mister Rogers that included an interview with the inventor of our beloved mindfulness tool, the Hoberman Sphere, took a break for egg hunting on campus with the older kids, read some more, had a Horton Hears A Who inspired yoga story time with a guest instructor, and a surprise visit with the fluffiest rabbit and newborn baby bunnies care of a parent. In there too I snuck in a craft that I’d been brewing up with the aid of Pinterest. We watched a video on loop- how to make an “easy” origami heart. By the end of the day, I had dozens and dozens of hearts. When we came back from Spring Break I set out to do as I’d planned and that was to make a mobile. I’m not crafty. There are lots of things I am. Interested in patient, quiet crafts is not one of them. But I spent Monday threading the hearts. Tuesday we hung it from a lucky little hook already installed in the ceiling.

Today, one of the kids said to me, Are those the hearts we made? Why did you choose those hearts for the mobile? They aren’t that good. Some people couldn’t even fold right!” Because I’ve had similar conversations about perfection with myself and others, I had a response ready. “That’s the point! They aren’t perfect. But you all made them and so they are perfect. The point was the effort and love y’all put into it.” And I wasn’t just saying it to sound good, really. These hearts dance from the ceiling, the rest hang in a garland/banner elsewhere. When I look at them I think of all these imperfect hearts, some more than others, all together and how lovely it is. When I look at the ceiling I think, “I love you [no matter what, no matter who], keep going.” 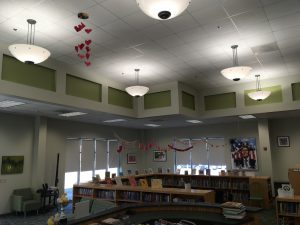