What do jury duty, National Honor Society, and debate research in frosh classes have in common?

Why, that would be… EVIDENCE!

My question to you this month is: What are you teaching your students about evidence in their research work?

I have been thinking a lot about evidence of late because I recently won the jury pool lottery, I have been reading National Honor Society applications from students, and we are about to start working on research for a debate project with some frosh classes.

Juror #10 for the Win! – In my worst moments as human being, I sometimes dream of winning a ginormous lottery, buying all the businesses that have given me bad service over the years, and firing all the people responsible for the heinous wrongs they have inflicted upon me. Unfortunately (or, in reality, fortunately…) the Universe isn’t designed around Dave’s crazy delusions of revenge so try as I might I never seem to win huge cash lotteries. Not winning huge cash payouts, payable to me either in a lump sum or as an annuity over a period of twenty years, means that the rather obscene scenario outlined above will likely never come to pass – in the scheme of things, not such a bad thing…

Things to do: Make friends with Peter Theil

You know what kind of lotteries I do seem to win, though? The jury pool lottery! Last week I served on my third jury. Unlike, Stanley Hudson, one of my favorite sitcom characters of all time, serving on a jury isn’t an experience for which I have had an unfulfilled longing over the years. 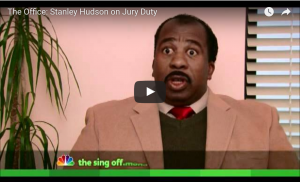 I do believe with all my heart, however, that with rights come responsibilities. As a good American citizen, after receiving my jury summons in the mail, I show up when it says to show up. If you are not an American citizen or just have not been called for jury duty, here’s how it works. You show up at the appointed time. The names of all of the prospective jurors in the jury pool go into a bingo game-like hopper. The bailiff spins the bingo hopper around like an organ grinder. Round and round it goes! If your name is one of the first twelve that fall out, you sit in the jury box so the lawyers can ask you questions and decide if they like you or if they want to strike you and call another juror with a better face.

I have the juror lotto wired! I win almost every time!

Aside: My lawyer friend says that lawyers love librarians because, “Librarians are used to weighing evidence and evaluating arguments so usually I’ll try to keep them.” Yay for us…

As it turned out, I was assigned to a dog of a case. There was no credible evidence so my jury of seven men and five women found the defendant not guilty after about fifteen minutes of deliberation.

Evidence of Leadership – The wheels of American justice turn rather slowly so during our hour-and-a-half long lunch break, and our half-hour breaks throughout the day, I was also reading student applications for membership to our National Honor Society. National Honor Society asks that students show evidence of: scholarship, character, service, and leadership. This is the third year that I have been a file reader for the NHS selection process and over the years it has become clear that even some of our best students struggle with concept of “evidence.” Evidence of service is easy. “I did ___ hours of community service at the Institute for Human Services serving meals to homeless people.” However, how one documents “evidence of leadership” is a task that seems to challenge many of even our very best students.

Which brings us back to my question for you this month. What are you teaching your students about evidence in their research work?

We are about to start working with some frosh classes doing research for public policy debates on global issues. We teach that a good debate argument has three parts: the assertion, the reasoning, and the evidence. While it is a nice formula, I think that 14-year old me would have struggled to develop a complete 3-part argument and I think that evidence would have been the piece to give me the most difficulty.

In the past, my approach has been to teach student students that supporting evidence might come in these basic forms:

I’ve never seen or read anything about how other librarians help students find evidence to support their arguments so I’d love to hear about what you are doing!