Colorado Academy is a PreK-12 campus, and I work as the Middle School Librarian in the library that serves our 6th-12th graders. The building was completely scraped and rebuilt in 1998, and it’s a lovely, large space with big windows and lots of natural light. But, as I imagine many of you can empathize with, the furniture and the design of the space is a bit “20th century,” despite the fact that the work our students and faculty are doing in the library is very much anchored in more innovative and collaborative 21st century skills. While our library is somewhere on the list for updates on our campus in the next five (?) years or so, it understandably falls behind our un-air-conditioned theater building from the 1970s and several other more pressing projects. So, while we wait patiently for more large-scale improvements, last year we decided to completely shift one of the spaces in our library on a shoestring budget in an effort to better meet the needs of our community. I unfortunately don’t have any “before” shots as this was a last-minute, get-it-together-in-the-week-before-students-arrive kind of late summer project, but I want to share the results in the hopes that they might empower some of you to make the same type of grassroots changes to your spaces.

Last August, our Middle School Principal asked our former Director of Libraries if we needed any extra whiteboards for the library. A shipment for the Middle School had arrived with six too many rolling whiteboards, and rather than go through the lengthy process of returning them, he was trying to find someone who needed or wanted the extras. We happily made a new home for them in the library, which is where our grassroots remodel process began. 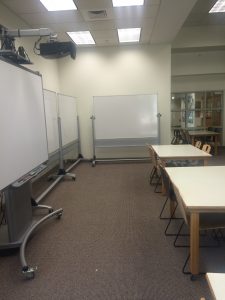 The whiteboards shown in the photo above seemed conducive to helping to create a design thinking-type learning space, and we used them to create a makeshift (but flexible) wall around a previously underused area in the library. 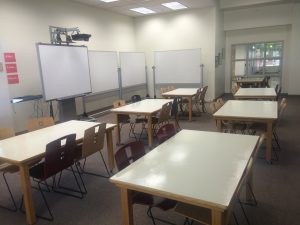 We already had a mobile smart board that we moved into the space, but we realized that the old-school furniture we had didn’t quite strike the tone we were going for. We didn’t have the budget for any new purchases, so our solution was to ask our wonderful and accommodating Operations department to put rolling casters on the table legs in order to make the space more flexible, which they were happy to do. Once the rolling casters were on, we used whiteboard paint (which we purchased at Home Depot) on top of a white primer to create dry erase surfaces for the tables. We did the painting work ourselves, and although the primer required several coats, it was a relatively easy process that only took a few days. 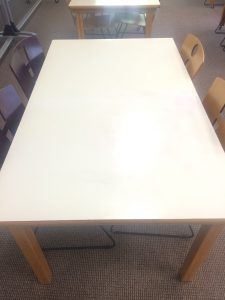 We kept the older chairs that were already in the space, and our Operations department agreed to replace the dim overhead lighting with brighter fixtures. Once the lighting was finished, we wrapped up this quick and cheap “renovation” that has been more impactful than we could have imagined.

Faculty members LOVE reserving what we now call the Teaching Lab for classes–whether they need a change of energy or pace or are working on something that could benefit from a more flexible space than a traditional classroom, we now have more classes meeting in the library than ever before. I’ve seen fabulously inventive configurations of tables and chairs, and I get a special thrill when I walk through the Teaching Lab after a class and see evidence of incredible brainstorms left behind on our dry erase tables and rolling whiteboards. It’s also been wonderful to have a bright, shiny space for my own instruction, which used to happen in a much smaller and darker room in a back corner of the library.
While I admittedly look forward to that day in the future when our space gets the go-ahead for a more comprehensive overhaul, it’s been empowering to realize that a DIY facelift can also do the trick in a pinch. How about you all? Any genius grassroots remodel hacks to share?

1 thought on “On Taking Matters Into Our Own Hands: A Grassroots Approach to Remodeling Library Spaces”