For a long time, one of my favorite sayings has been, “It takes a village to raise a child…”

I have been thinking a lot about that in our library programming of late. When push comes to shove, our reality is that,

“It takes a village to raise children to be information literate…”

I recently got an inquiry from an English teacher asking whether the library could recommend a documentary about the Iranian Revolution that she could show her class before their reading of Persepolis.

I dutifully sent a query to the trusty AISL Listserv asking for help and our international coterie of the world’s finest librarians responded with wonderful recommendations (as you ALWAYS do).

Games (vs. documentary) don’t always have enough learning to warrant the time they take but I’ve been more interested in 1979 Revolution: Black Friday https://en.wikipedia.org/wiki/1979_Revolution:Black_Friday created by an Iranian team based on documentary filmmaking style.  (You’ll have to play it and determine suitability for your students.)

Intrigued, I forwarded Debbie’s reply to Kerri, the English teacher; Brian G., our Director of Educational Technology; and Brian D., our Chief Innovation Officer. Within the week, the Brians had Kerri set up with a school account in Steam so she could evaluate whether the game was appropriate to her needs.

If, like me you are not a gamer and have never heard of Steam, here’s a short introduction to the platform.

What is Steam via Common Sense Media

At this point, one of our amazing technology specialists, Tony J., who is an avid gamer got looped into the process for support and to lend his particular expertise to the effort.

Once the ever-growing team looking into “gaming as information platform/information experience” decided that it was worth trying with Kerri’s students, Kathy W., the head of the high school English Department agreed to fund the purchase of a class set of licenses for Revolution 1979: Black Friday

That is, INDEED, the effort of an entire village! Anywhere along the line, a single person saying, “No! Do we really want kids wasting time gaming in class?” could have shut the entire endeavor down, but I’m incredibly blessed to work with colleagues eager to explore new possibilities! 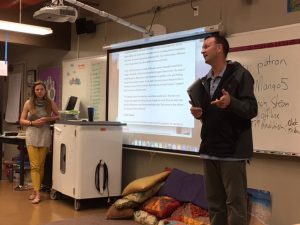 Mr. G. and Ms. S. introduce the gaming experience to the class. 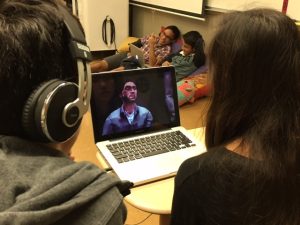 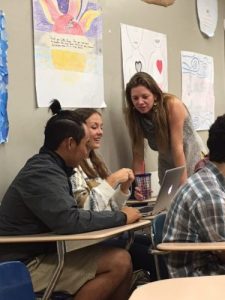 The gaming experience is imperfect if we look at it purely as an “information platform,” but thinking about the possibilities available to us beyond the book, the website, the database, and the video is truly exciting!

In concert with the gaming experience, students in Kerri’s class watched some teacher-selected documentaries, and read some teacher-selected articles. It was my hope that 1979 Revolution: Black Friday, would be a way to unlock and develop students’ empathy that they would then bring to their reading of Persepolis. It worked in some ways and fell a short in others.

Here is a sampling of some of Kerri’s students’ reflections:

“The video game was a pretty engaging activity for me. It was enjoyable despite my doubts about it. Usually a game or movie that tries extra hard to be educational will lose its entertaining factor, but that wasn’t really the case. It was a little clunky but it was nice to get into the perspective of someone in the Iranian revolution. I thought the idea was done well. Being a photographer in game, they incorporated real life photographs with historical context to show what it really was like. The game helped me understand viewpoints of the people that I could not experience from the book or the documentary. I ended up enjoying the story and found myself wanting to continue…”

“The video game was a helpful way to develop empathy for people fighting in Iran. One crucial factor that emphasized this was the possibility that you could die at any moment if you choose to do or say anything wrong. Additionally, the video game put the living conditions into perspective by having decent animations and real pictures. A down side, though, was that there were a lot of dead moments, where I felt like there was too much narrative and not enough choice for the player. Maybe the game could allow the person playing the game to type a response instead of clicking on the few options given. There could also be an opportunity to watch a video instead of just pictures….”

I’d like to start by saying that I love Telltale games. Their games are incredible experiences of which the choices feel like your own and shape the individual you become, and the outcome of the story. The game we played was obviously based off of Telltale’s style of storytelling, and that’s where my first major criticism comes in. In any sort of design or art, if your goal is to mimic the works of another, you’re only going to make a worse imitation of the original, and that really was present through the game. Every aspect of the game took a jab at the Telltale-style, from multiple-choice dialogue to quick-time events to small sub-games such as developing the photos and taking pictures, but none of them felt really enjoyable. I believe this is because there was a disconnect from the main character and the player. One of the first things that I noticed was that a lot of dialogue did not matter. The responses from other characters were pre-set. Regardless of what you said, you would get the same response, giving the illusion of choice. This made some audio strange. In an attempt to make proper response to all dialogue choices, some of the responses really didn’t make sense and just left me confused. There were also some issues in execution in terms of their attempts to have us learn about the revolution itself. Instead of incorporating facts into the game itself, they gave them as extras unlocked by taking pictures. I didn’t read the extras, I probably wouldn’t have if I played the game all the way through. The point of games is to engage the player into the story and the world, and while this was definitely a better than average attempt than most, it just wasn’t quite there.

Clearly, the experience wasn’t perfect, but the response from students was positive as a whole. As I see it, gaming as an educational information platform is in it’s infancy. At this point it has all the potential in the world to be something AMAZING, TRANSFORMATIVE, and to do much good in the educational world!

… Or it could become yet another great idea with great potential that grows up and achieves nothing other than being famous for being famous. Alas…

Let’s hope that doesn’t happen to this beautiful young idea as the aghast-ability [that’s for you Jennifer Falvey!] is almost too much to bear!

In many ways, this exploration has left me with more questions than answers. Some of my initial emerging questions of gaming as an information platform include:

I suspect that we will begin to see more efforts and products like 1979 Revolution coming to the market going forward. There, clearly, is so much more for us to watch for and to learn.

In the end, this endeavor into gaming as an information experience has left us with a promising initial “proof of concept.” Both our digital media arts teacher and the visual arts teacher who has students exploring sequential storytelling have also expressed interest in exploring the possibilities the platform presents.

It does, indeed, take a village to raise information literate children. It is truly amazing to work daily with so many villagers who are so very willing to share in our work!