That’s exactly what the first graders students at my school did. Their PBL (project based learning) unit was on their bodies and “the big question was, ” What part of your body is the most important and why? ” Each student could decide how they wanted to do their final project share, after they did all their research. Several students wanted to design their project in the maker space and came to the area with their ideas and some materials.
After discussing what they wanted to display, one group used littlebits to depict how the brain sends messages to all parts of the body. They used colored tissue paper to make the brain, and traced an outline of their body out of out of butcher paper. By tinkering with the different components of the littlebits, they used the long led light wire to represent the messages sent by the brain through the nervous system.They taped all of these items to the paper model and here is their final design: 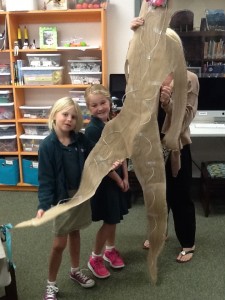 Another group was interested in the skeletal system and started collecting and cutting up different sizes, shapes, and textures of cardboard. They used the tool kits and bolts in the MakdoKits to give the cardboard skeleton movable joints ! A round piece of cardboard was selected for the head and of course they added the smiling face. 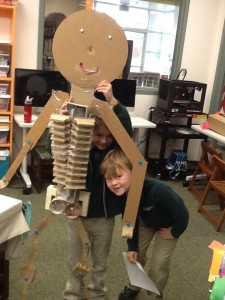 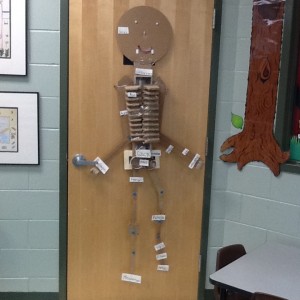 The group that picked the circulatory system brought plastic blue and red straws to use for their project. Using another paper outline cut out for their body, they decided to glue straws on it showing the veins (blue) and arteries (red) that had been oxygenized. They also had balloons to represent the lungs and borrowed the balloon inflator from the maker space to demonstrate how the lungs work in the circulatory system. 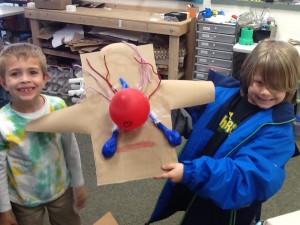 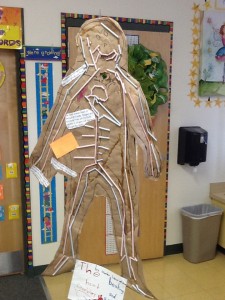 For the digestive system, students from another group made an esophogus using a cardboard toweling paper tube, a plastic zip lock bag for the stomach, clear egg cartons filled with food representations for the lower intestines, and yarn measured exactly the length of our upper intestines. 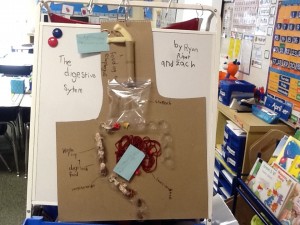 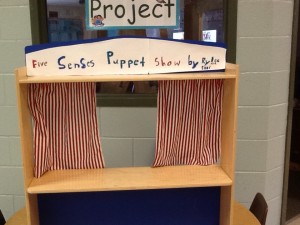 The parents were invited for the final project share and the students were dressed like museum guides. The classroom was transformed into a body museum and the students directed the tour. Each station was taught by the students, their projects were explained and the facts and information they researched was shared by the students. The teachers were on the side watching and listening to the comments of the visitors. 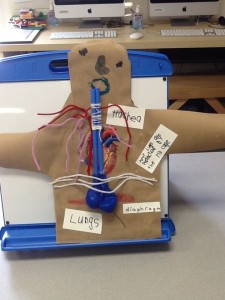 In a world where the 3D printer is being used to actually make body parts and prosthetics, these first graders were truly an inspiration for the future. Recently, I read that a student actually made his own 3D braces and saved over $7,000.00 by doing it. Once again the belief that if students are given the opportunity to take ownership of their projects and are given some direction they get excited about what they do and learning does take place in a more exciting manner. Let them go….watch them….and be amazed….I always am!