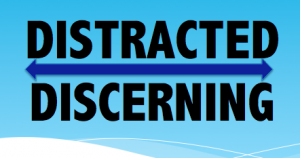 “If you could control someone’s attention, what would you do with it?” Sleight-of-hand artist Apollo Robbins poses this question in a TED talk “The Art of Misdirection.”  In Robbins’ amusing stage demonstration, he “pickpockets” items from a willing volunteer by using a series of verbal cues and distracting hand manipulations to misdirect attention. In the act’s finale, even the audience becomes surprised by their inattention, failing to perceive what was right before their eyes. Though not in the business of fleecing young teens, educators are in a similar struggle to find ways to engage adolescents’ attention and promote learning and memory.

Researcher and author Maggie Jackson picks up this theme in her book Distracted.  Jackson cites a perception experiment that was done in 1999 in which research subjects were asked to view a video and count the number of times a basketball was passed among players wearing white shirts.  The viewers were so intent on watching the passed ball that they missed seeing a costumed gorilla that walked among the ball handlers (Jackson 138).  You have to see this video to believe it: Gorillas in Our Midst. The research study suggests that “Without attention, we often do not see unanticipated events, and even with attention, we cannot encode and retain all the details of what we see” (Simmons and Chabris 1065). Interestingly, these findings dramatically point out several concerns relevant to our “distracted” age of technology: 1) Are student information seekers open to those “unanticipated events,” those moments of discovery? and 2) How much are students attending to the information they read?

As one approach to addressing these concerns, I would like to suggest a movement away from distraction and toward more discerning minds by engaging students in directed physical movement as they think and attend to information.  For several years I have incorporated student discussion activities suggested by Barry Gilmore in his book Speaking Volumes; here are a few movement/discussion activities that have been successful in getting students on their feet, tuning in their attention, and developing insightful class discussions. (The following examples are from discussion prompts I adapted, but Gilmore has generously provided a series of discussion resources linked to novels and nonfiction books on his wiki.  Be sure to check these out.)

Students take a pencil and paper survey, total their responses, and then line up in order of their total.  The strategy to compiling this survey is to make the survey statements from one extreme point of view.  Students then take turns discussing their rationale for giving a statement a high or low agreement rating.  This activity gets everyone talking and anticipating themes or ideas that will be later read in a text.  I used this activity with a Freshman Health class unit on Digital Citizenship, and the Bullying Survey led to a good discussion of the myths of bullies/victims.  Sample survey statements included:

How just are endings to characters’ dilemmas in stories?  This grid is a fun way to explore poetic justice.  Use masking tape to mark out a large grid on your classroom floor and write the following in each square of the grid:

As you name a character from a story, students stand in the grid presenting their assessment of the character’s ending and  then discuss their rationale. Using examples from the book Rebecca by Daphne du Maurier, students might stand in the “End Badly, Gets what he/she deserves” for the sinister character Mrs. Danvers. However, students may have more ambivalence as they discuss the character Mrs. DeWinter…did she end well and get what she deserved or did she end badly and get/not get what she deserved? (How happy is a life living in hotels with the moody Mr. DeWinter, someone who murdered his first wife?)

As the name suggests, a circle of three to four chairs forms an inner circle as the rest of the class stand outside.  Only students seated in the circle can speak to a prompt; students in the outlying areas can tap in to take a seat and continue the discussion.  An interesting aspect of fishbowl discussions is that students waiting to speak must also “listen/learn” from those in the circle who are speaking so that when their turn to tap in happens, the new arrivals have relevant, perceptive comments to add to or challenge what was previously stated.

1) How much of a willing participant were Hitler youth members and/or German citizens during WWII?  (for a discussion of books such as Hitler Youth, The Book Thief, or All the Light We Cannot See)

2) How can we sort out truth or justice in criminal cases that involve bias toward gender, race, or social status? (for a discussion of books such as To Kill a Mockingbird or Alias Grace)

In closing, consider again, “If you could control someone’s attention, what would you do with it?”  Join the movement to focus student attention and deepen learning!