Skip to primary content
NAMI, the National Alliance on Mental Illness, is the nation’s largest grassroots mental health organization dedicated to building better lives for the millions of Americans affected by mental illness (from http://www.nami.org). Two years ago, one of my students, Katherine, began the nation’s first high school chapter of NAMI  as her Signature project (our version of a Capstone). 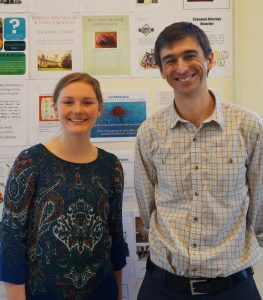 More about her project here.
Not only is Katherine a passionate mental health advocate, but she is also an avid reader.  She has read a lot of older titles and so I am constantly looking for new young adult fiction dealing with mental health issues that she or her club members might enjoy. This year I have found two titles that I really liked: 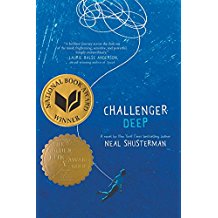 From Amazon:
“Caden Bosch is on a ship that’s headed for the deepest point on Earth: Challenger Deep, the southern part of the Marianas Trench.
Caden Bosch is a brilliant high school student whose friends are starting to notice his odd behavior.
Caden Bosch is designated the ship’s artist in residence to document the journey with images.
Caden Bosch pretends to join the school track team but spends his days walking for miles, absorbed by the thoughts in his head.
Caden Bosch is split between his allegiance to the captain and the allure of mutiny.
Caden Bosch is torn.”
Written in such a way that even the reader is unable at times to differentiate reality from fantasy, “Challenger Deep” really put me inside the head of a character and allowed me to experience his mental illness in a very meaningful way. This is a quick read (an excellent audio book for teens who enjoy them) and, as always, Schusterman was effective in crafting well developed, highly empathetic characters. Katherine and I highly recommend it.

From Amazon:
“Sixteen-year-old Sarah can’t draw. This is a problem, because as long as she can remember, she has “done the art.” She thinks she’s having an existential crisis. And she might be right; she does keep running into past and future versions of herself as she wanders the urban ruins of Philadelphia. Or maybe she’s finally waking up to the tornado that is her family, the tornado that six years ago sent her once-beloved older brother flying across the country for a reason she can’t quite recall. After decades of staying together “for the kids” and building a family on a foundation of lies and domestic violence, Sarah’s parents have reached the end. Now Sarah must come to grips with years spent sleepwalking in the ruins of their toxic marriage. As Sarah herself often observes, nothing about her pain is remotely original—and yet it still hurts.”
I gave this to Katherine to read over the break so I haven’t gotten her feedback yet, but I really liked this one and read it in a single sitting, on a bus en route to a trip to Boston that I was chaperoning. Know that there are some shocking moments–domestic abuse, substance abuse, etc.–but I think it’s as poignant as “Challenger Deep” and a great choice for older readers interested in books dealing with mental illness.
Can you recommend any other books published in the past year or two that I might pass along to Katherine and/or our NAMI club or that I could use in our Mental Health Awareness month display?

5 thoughts on “Mental Illness in YA Fiction”