My thoughts today are about lessons we’ve learned this year in the library. A good library program is always adjusting balance and content, tweaking this, fiddling with that. Today I’m exploring a few important issues, one of which is the vital need to keep learning lessons, no matter how hard — or uncomfortable– it might be to continue being a student of life and libraries. 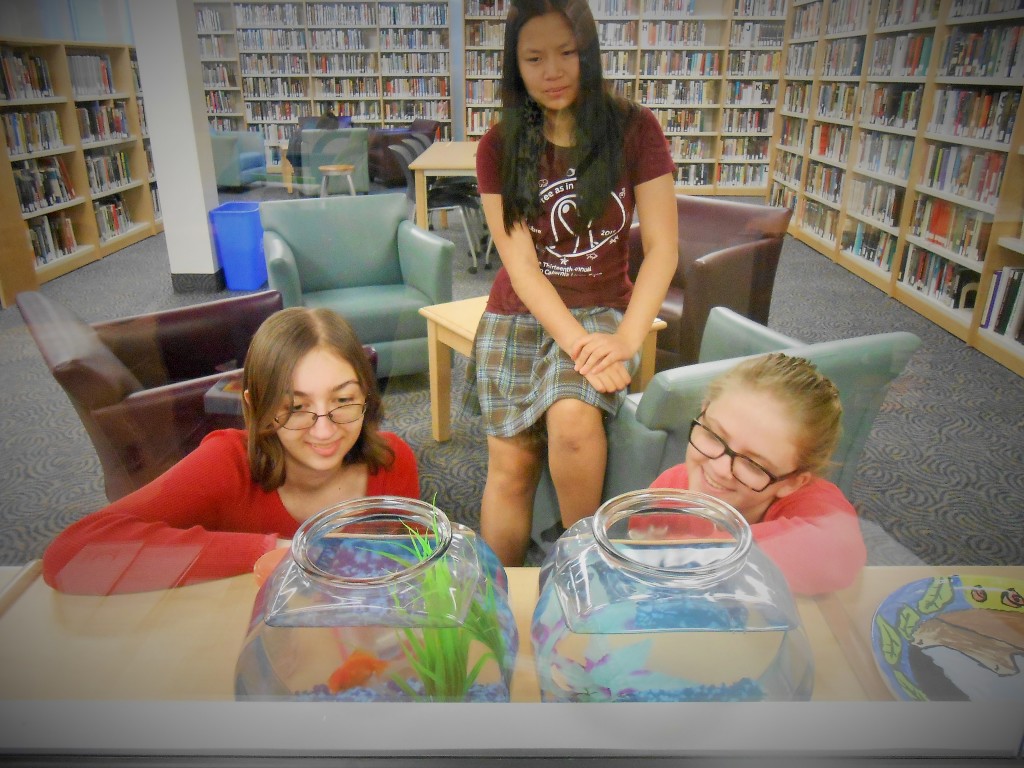 1. Fish are wonderfully soothing … until they die.

As we were preparing for our annual Moby Dick All Night Readathon (see my blog post from April 2014 for details of last year’s event), some students wanted to bring in fish as decor, and asked if we could keep them in the library after the  Moby Dick reading was over.  Once we cleared up a few details about care and feeding and summer vacations, I agreed. One Goldfish and one Betta joined the library crowd, first in the ghostly lighting of the Moby Dick reading (below) and then for a ‘forever home near the magazines (above). Turns out, everyone loves fish! They seem to have a definite tranquilizing effect on stressed out students. We have small stools that allow students to shift seating around easily, and it’s fun to see how many kids are able to crowd around the 2 small tanks. 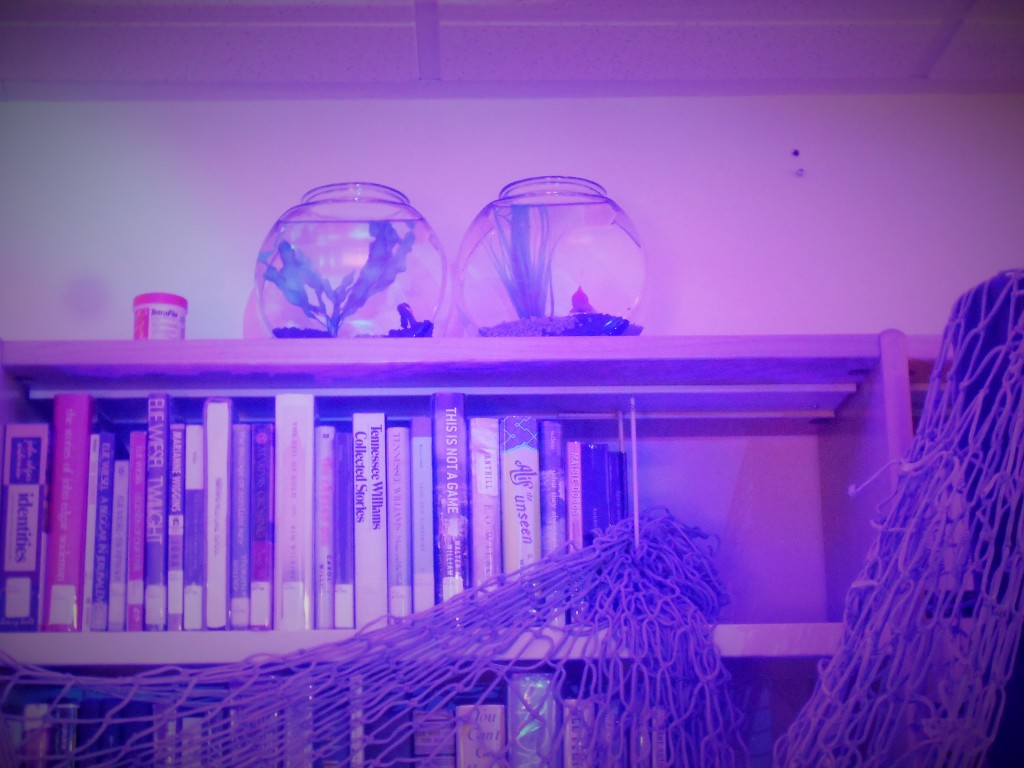 The Chief Fish Wranglers soon found out that larger tanks were needed, and specialty items required to keep the fish healthy. They created a Fish Club, had a bake sale and (with the help from Marine Biology teacher) made treks to Petco down the road. A poll was taken to chose names for the fellows, now named officially Melville and Hawthorn (my choice, Fast Fish and Loose Fish, did not prevail). I have been minimally involved, but have enjoyed the process, seeing the students solve problems, and watching the fish thrive.

That is, Melville, the Goldfish, has thrived. Hawthorne, the Betta,  not so much. Tricky fellows, apparently. One student who had kept fish for years was pulled in as consultant. This and that was tried, and we hoped the new heater would do the trick but alas, no. Hawthorne succumbed to his ailments.

There were some tears and hugs, and a long weekend to recover. Today we begin talk about ‘What Next?’  It’s sad, but as they say, life goes on. Melville is very feisty, and continues to be a draw for students intrigued by the glimpse of another world, Under The Sea. For high schoolers facing finals, this has been a really popular stress-buster. It seems that a spot of time ‘chilling with the fishes’ allows students to slow their own life down as well.  It makes a nice partnership with the coloring books we’ve recently added.

A student just came up to ask if the coloring books would be back next fall. She’s just finished some work and will be doing a little coloring for awhile. Very restful, she says. I was happy to reassure her that this will be one idea that will continue next year. We allow students to copy pages and work on clipboards, or even (GASP!) to color right in the book. If they get filled up we can get more. Revolutionary, I know! but pretty exciting. 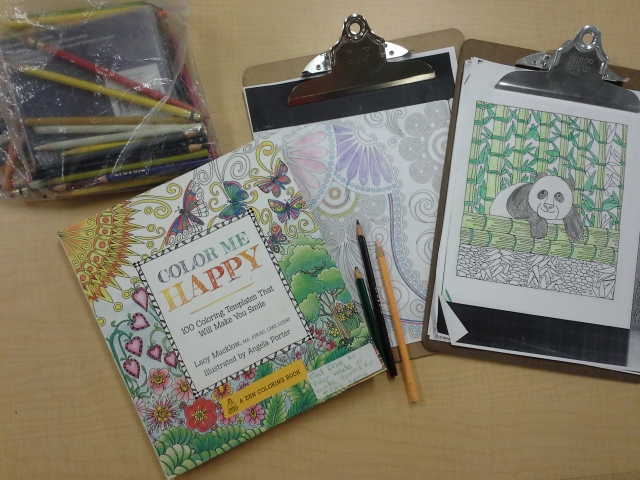 2. An idea so crazy it actually … didn’t work so well.

At the end of last school year, we tried a pilot program to see what would happen if we allowed students to eat in the library. See my blog of May 19, 2014, to get the details of our trial process and what we found. We polled our librarian colleagues across the nation (and Canada!), collected up everyone’s experiences, and decided to take the plunge.

When school started this year we allowed food in the library as long as mess didn’t become a problem. We increased trash bins and arranged for trash collection by midday, to control the smell and allow for easier cleanup. We also increased our own patrols to remind students that they will need to clean up after each other if this is to work. Even if the mess isn’t yours, you still need to keep the area tidy as you leave.

The main impact of this new program is twofold. There is mess, but not really as much as you’d think. We’ve been keeping a tally  of ‘End of Day Mess’, with location and ‘mess level’ recorded. The bulk of the mess was dry wrappers and water bottles, and the messiest areas tended to rotate around the library. That is, no one particular group was responsible for the mess.

The second and main takeaway was a surprise to me. The main problem with food in the library isn’t mess. It’s noise. When students are able to eat breakfast, lunch and snacks in the library, then they really start to feel at home in the library. That’s a nice thing in theory, but in practice it involves a lot of sprawling belongings and the general aura of a den or college dorm room. Territory becomes an issue, which some students claiming certain spots, even if they’re not actively there. Behavior also loosens up and noise definitely increases.

We’ve just run this year’s Library Evaluation Survey, and have found out (no big surprise) that most students really liked having the ability to eat food in the library, and most students liked being able to be more casual and a little louder (we got some nice thank you’s for being ‘welcoming’ to sometimes boisterous groups). However, there were a few students who didn’t like the smell and some who didn’t like the added noise.

One of the most memorable lessons I learned in high school was from a Henrik Ibsen play, An Enemy of the People (Thank you Mr. Chaney!).  A town’s livelihood (health spa) was being threatened because the local doctor wanted to close the baths down due to harmful germs. In this case, the majority clamored to silence the doctor and to keep the baths functioning, no matter the risk to the public. Ibsen called this “the tyranny of the majority”. Just because more people are on one side doesn’t mean that side is actually right. It was an intoxicating idea to this idealistic teenager when I read it in 1974, and I am brought to think of it again.

What did Ibsen really mean when he coined the expression”tyranny of the majority”? This got me thinking of “majority rules”, affirmative action and minority rights. Just because ‘most people’ like the food program, is that enough to continue it? Do students have the right to a food free environment if food and accompanying mess and noise bothers them? What if food helps some students work better?
3. We’re all here to learn; students, explicitly, and  teachers, implicitly.
Paradigms shift, generations come and go, Libraries become Media Centers, then Learning Commons then Libraries again. The more we change the more we stay the same. Unless we can embrace change, as well as the “growth mindset” as described by Carol Dweck, so that we are not afraid of failure, we will fail our students. An adventurous approach, with serious examination of ideas new and old,  along with both the ability to try new things and also to admit failure “this time” — this will give us the strength and flexibility to continue our explorations into new ways and approaches, ultimately to keep what works and toss what doesn’t.

I had a twinge of concern that as we evaluate the food issue, we may have to say “It didn’t work out. We need to pull back”. I realized I was worrying about not having ‘succeeded’. But really, the main thing is not to be paralyzed by the worry that something won’t turn out well. If we are, we’ll never try new things. We need to realize our students are having these very same challenges as we are, that we’re all learning lessons alongside one another. 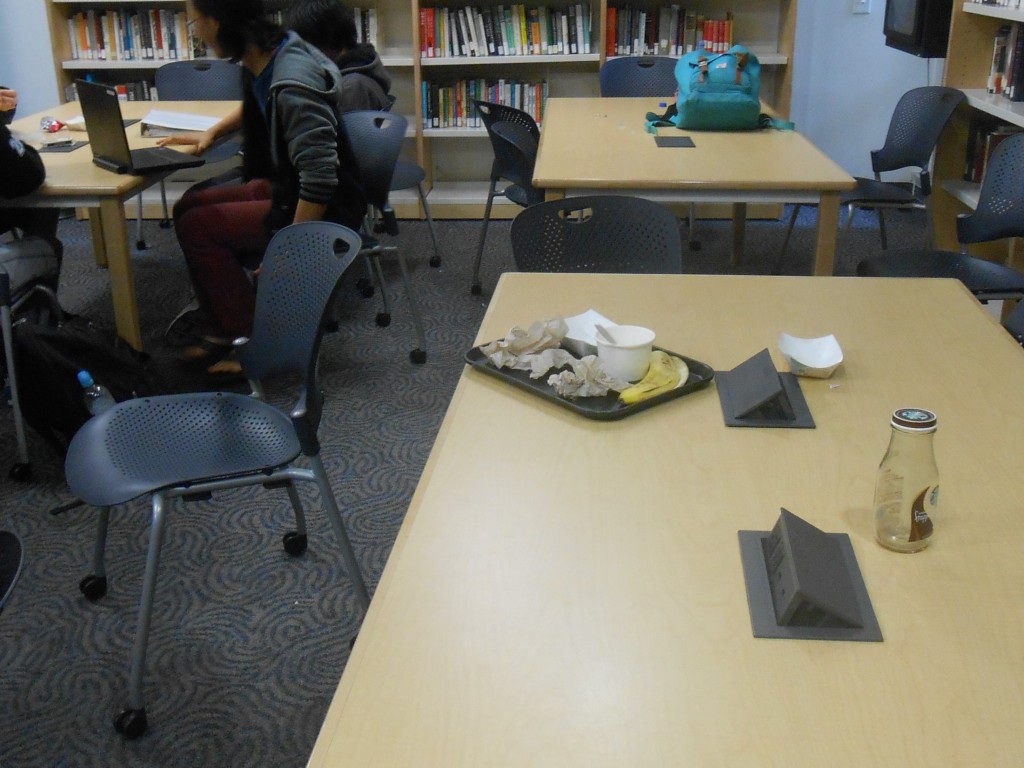 As for the food issue, we will continue to evaluate and come up with something brilliant, I know. As my guru the Magic Eight Ball says, ‘More Will Be Revealed”.