Last week, my school credit card was canceled. Even though I’d like to blame this on the way that Amazon can’t seem to help breaking my single order into multiple payments, it was ultimately my responsibility to make sure the statement was correct.* All school credit card holders had received a reminder from the Business Office with the warning that anyone with an incorrect statement on the 3rd of October would lose access to their card. While people would tell you that I’m more organized than most, and while this never happened with our previous banking system that sent email reminders for unreviewed transactions, it’s not the first time that I missed a deadline with our new system. It is, however, one of the first times I felt a real consequence for an inattention to detail. Since I had been developing a system that was working for me, I’m annoyed with myself that I didn’t meet my own expectations, particularly because I felt like I was caught on a technicality. (See below.)

Coming back from a long weekend with my parents and brother, I can’t stop thinking about the credit card as it relates to my successes (and mainly failures) playing video games. For the most part, I found school pretty easy, and I enjoyed it. I still love learning, and I still don’t like making mistakes. Reading is my primary hobby. For my brother it’s video games. With storms in the mid-Atlantic , we spent a lot of time playing video games the past few days. Reading does not lend itself quite as easily as a shared activity across the generations. Yet, video games often get a bad rap. In fact, I’m collaborating on a Sophomore project right now that begins with this premise. However, I want to question that assumption in two key ways.

1.      There is tremendous background knowledge required to understand video game systems and the norms in the games themselves. I don’t know where the X button is, what’s likely to make my character jump or that a Martian on screen represents a character from the early 1990s. If you were measuring my video game skill by lexile, it would be low. Not because I couldn’t understand it but because I haven’t yet learned the terminology. Scaffolding is important. The game where I experienced the most success is Mario Kart, largely because I played a lot of SNES Mario Kart when I was in middle school. I was wowed by my brother’s ability to enter a new game, navigate the controls, determine the purpose, and immediately act like he had a direct connection with the avatar on the screen. I can’t even look at the score on the screen while making my character move. He works in the medical field, and I can see how his ability to think quickly, parse new information and multitask would be assets that help him excel on a daily basis. Learning the basics in a field makes it much easier to move on to more advanced knowledge, often without even realizing that we’re using our tacit knowledge.

2.      Video games teach resilience. The Switch is a forgiving system for new users. Death Squared, despite the macabre name, is a team puzzle solving game, a modern version of the logic games we used to play in elementary school. There is a goal, teamwork, and sequencing of actions. It is impossible to know what will happen when you step on a tile without actually stepping on a tile. And sometimes getting spiked. Or blown up. Or lasered. Or falling off the edge. At which point you begin the level again with that data and avoid the activity that just got you killed. The two video game experts in the room anticipated this, planned for it, and then chuckled at the new way we’d found to destroy ourselves. The two newbies apologized every time. Even with teaching about the growth mindset, it’s hard for me to keep this from feeling like failing. If you give me a goal, I want to go directly there, but I also realized the resilience my brother has developed while gaming directly relates to his ability to respond appropriately to setbacks in his job. 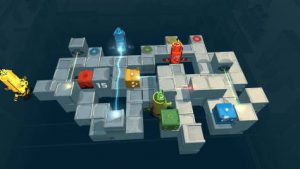 Playing games this weekend ultimately had me thinking about some of the struggles that some of our best students have with research. Coordinating the Capstone Scholars at my school, I spend two periods a day with students who are grappling with large-scale independent research projects. This is the first time they are creating their own targets, measuring their own progress, and following their own interests. Each has an internal faculty mentor and an external academic mentor, and my role is in helping them navigate this process. I honestly don’t know that I would have had the maturity in high school to motivate myself the way that they do. For students who have always been “good at doing school,” it’s a substantial adjustment to learn for yourself when it’s not clear if you are successful on a day-to-day or week-to-week basis. They are making up the rules as they go and trying to follow their own moral compasses. Without an external measure of success from a rubric or a transcript grade, the notion of success morphs. There is no answer that I can provide, and the amorphous shape of real-world research can be overwhelming. I can’t pretend that I was playing video games these past few days to learn a life lesson, but I can tell you that I want to take the notions of contextual knowledge and resilience back to our top students.

No one is perfect, and no one gets it right 100% of the time. But we more often celebrate our successes publicly and cover over our insecurities privately. I think that’s why there was such a strong commiserative response in our community to David Wee’s post about Messed Up Library Lessons. We’ve all felt this way, but how often do we acknowledge this to our peers, to our students, to our families? University of Houston professor Bene Brown’s TED Talk on the Power of Vulnerability has been viewed over 36 million times, likely because we all have times when we’re afraid to be vulnerable. As a perfectionist, this post is tough to write. If I get my credit card privileges back, I will guarantee you that losing it was the most effective way for me to learn a system in which I will NEVER forget to reconcile my statement. I might forget other pieces of office work, but not that. Failure is a powerful teacher. Let’s all keep learning and striving for success and setting up libraries where our students are empowered to do the same.

*Full disclosure—I did reconcile my account the morning of the 1st but then my Amazon order, which had been broken into four parts, despite being shipped in only two shipments, posted two more transactions that afternoon. I hadn’t tallied up the totals of the two I had paid to realize that the order was incomplete. I fully admit that in two earlier months I had forgotten to even enter the system, but a simple calendar reminder is all I needed to solve that problem. So I’m still going to argue that Amazon deserves part of the responsibility here. And if you have had success stopping this sneaky accounting, you’ll be my hero and a hero to all Amazon users at our school!