This year, our school’s annual, 40+ hour, 5-month-long, co-curricular project with our ninth graders took place over six hours during the first week of January.

During this project students work in groups to research and ultimately present about a social issue of their choice to the grade-level parents. While this year’s nine-person faculty team determined that students would still make a brief Flipgrid video on their topic as a final product, I volunteered to design the week-long mini-course in which they would research and present their topics. I then had to decide what I really, really wanted our students to learn. Since our first run, eight years ago, students have consistently been asked to investigate multiple points of view with regard to their topic, and I have just as consistently been struck with how challenging it is for them to imagine what those viewpoints might be. So, I decided to focus on skills related to searching for and identifying multiple points of view. Specifically, our one requirement for the week was that they identify at least three perspectives on their topic.

Before winter break, students had studied Early Modern Islamic Empires in World History, and had submitted connections they saw among the political history of the Safavids, Mughals, and Ottomans and issues of global health and/or justice in the world today. I took these contemporary connections and, based on the topics each student highlighted, assigned them to groups. Since our time was so short, I framed broad research questions for each group based on their expressed interests. Almost every student articulated a pressing engagement with how personal identifiers played into political leaders’ use of power to privilege or repress different people under their influence, across a range of topics from voting rights to vaccine development to rights of women in Muslim countries (see the outcome of this last topic below).

They had their topics. I had my learning objective. Now, I just had to figure out how to teach the skill set of searching for and identifying multiple perspectives … in 40 minutes or less.

Through a day-long debate with my 20-year-old offspring, we formulated the following approach to identifying multiple perspectives. Though I taught it to 64 students at once in a Zoom meeting, I would definitively say my thinking is still in draft form. Please help me kick the tires and see if it holds up! I would be deeply grateful for critiques and feedback.

It always feels helpful to start with a framing activity that helps to ease students into the complexities we will be tackling in a lesson. In this case, I wanted to get them thinking about how the “government’s job” is not a unitary or settled notion. By adapting a few questions from the (wonderful!) World Values Survey and a recent budget survey done by the city in which our school is located, I asked them to answer four questions about what governments should prioritize. 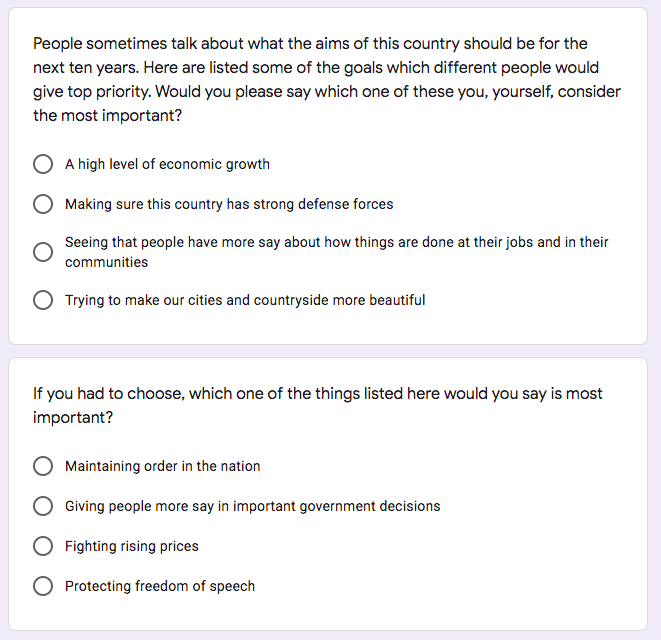 Though I did briefly show them results to demonstrate that, even in the “room,” we had lots of varying opinions, I cared less about their answers and more about the students contemplating competing priorities.

Ultimately, we framed the lesson around the notion of “Priority-based perspectives,” the idea that points of view vary because individuals and organizations must sort through conflicting needs, and some must ultimately take precedence. I drafted a list of what some of these categories of priorities might be:

The big epiphany I had (though it seems obvious in retrospect) was that my students were never thinking beyond the moral concepts that drove their own interest in their topics. They simply don’t have the life experience to suggest another path for investigation. So, we spent some time discussing that, for example, no matter how strongly you consider rest a moral right, the need to feed and house your family might still require a higher priority than time to rest. Similarly, you may morally believe that everyone has the right of equal access to a COVID vaccine, but we have been witnessing the real logistical challenges of efficient and equitable distribution.

Of course, we reviewed a few key search tips:

1. Pay attention to search terms, which will yield specific POVs:
— For example: Undocumented workers, illegal aliens, birthright citizenship
2. Search for your answer, not your question:
— Think about what you might expect someone to write about a topic and search for that.
— What words might someone use when they are talking about “morals”? How about “economic”? For example: budget, cost, price tag
3. Consider: how might people with the same goals have different priorities that lead to different POVs?
4. Remember to use stepping stone sources:
— Identify expert vocabulary/pertinent search terms that appear in the sources you have read so far. For example: CRISPR, designer babies, genetic engineering
— Who are some stakeholders mentioned in your sources who have points of view on this topic (people, groups, or organizations who care about the issue)? For example:
1.”According to the Department of Justice…”
2. “Emails leaked by the whistleblower”
3. “Professor Arvind Gupta, a researcher at the University of Oklahoma…”

There was one final issue that required addressing in this lesson: what does one do with points of view that do not meet with standards of evidence-based-reasoning? In the past, I have taught finding various political perspectives and a separate lesson on more diverse news consumption generally (finally this year I pointed out to a colleague that selecting sources by left-leaning and right-leaning just left out too many people, and ethnic, religious, and other community news sources needed to be included in any list of sources for reading political news). Yet, I try to balance understanding various perspectives against including harmful or factually incorrect perspectives in the classroom. For example, we do not accept as factual perspectives disproven medical studies (they may be mentioned for influence, but not presented as informational sources). I’ve never quite figured out how to walk that line effectively.

In this lesson, I drew on the World History course theme of historical empathy, and explained that identifying priority-based perspectives is an interstitial step that assists in identifying a range of perspectives; doing so also helps us understand the mechanisms that create structures in our world today, including the persistence of structural inequity. After identifying different priorities, and (potentially) sources that speak from the perspective of those authorities, it is the researcher’s job to evaluate the source (or, as we teach, identify the context and construction of the source’s authority) and determine whether it passes muster in our evidence-based environment.

The faculty for the ninth grade project all agreed that the students’ work this year was quite strong, despite the various emotional challenges everyone faced during our six hours of project time (including the events of January 6, 2021). I was particularly proud of the group that wanted to focus on women in Islam, as they moved themselves beyond a blind critique of the “other” and ended up delving deeply into a complex set of women’s perspectives about being a hijabi.

So, the idea of priority-based perspectives seems to work. Yet, I suspect I am missing (various) pitfalls or have elements lacking clarity. Thoughts?