“Your brilliant first flop as a raging success!
Come on, let’s get busy and on to the next!”
She handed a notebook to Rosie Revere,
Who smiled at her aunt as it all became clear.
Life might have its failures, but this was notit.
The only true failure can come if you quit.*

My first year as a school librarian was a lesson in letting go of fear of failure. I didn’t learn it so much as I didn’t fight against it- failure was happening every day and I could either lean into it and accept what was or be miserable. Here I was prepared as I could be with a careful, color-coded spreadsheet and lesson plans and yet, I could not seem to predict how it each class would go. These days I find others words for what I would have called failure in the past- when I walk into a lesson without expectations, I am able to see what I might have missed.

The last three weeks of library class for second grade are a lesson for the students and for me, too, about getting comfortable with making “failure” a challenge. It also serves as great chance to practice the design thinking process implicitly or explicitly. A row of books that’s been carefully set will inevitably be accidently knocked down and need to be redone. An unplanned start often shows us where our chain is weak and can allow us to tweak something we wouldn’t have noticed otherwise. We practice how we talk to each other in collaboration and examine our perspective. The measure of success in these weeks are quiet but brilliant: overhearing one student tell another “It’s ok, we’re learning” as they cleaned up a turn that didn’t quite work out or watching four separate groups decide on their own to join forces. 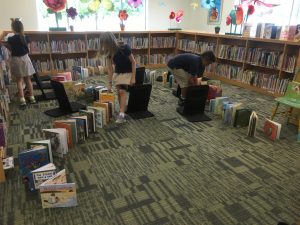 Below is a rough outline of this lesson:

Part 2: Watch the Seattle Public Library launch their 2013 Summer Reading Program by breaking the world record for longest book domino chain. We generally watch the video twice, focused the second time on the details of the set up (How far apart were the books? Were they all the same size?)

Part 3: Break into groups of 4 and create prototypes. We film these trials so that we can watch them later and learn what worked and what didn’t. The students do the filming with our library iPads.

Part 4: Come together as a class and create a big chain together (if this hasn’t happen organically).

1 thought on “If At First You Don’t Succeed: Reading Rosie Revere, Engineer with 2nd Grade”