Our book club had a bumpy start this school year, as perhaps two thirds of our club was active in the school play which kicked off the year. We didn’t really get in gear til after West Side Story closed. I wrote about our book club in September of 2014; I love it as a way for busy students to keep in  touch with the reading world.

Last week we had a planning meeting with five book clubbers to try to jump-start our activities after the play closed. Members had been tasked to come prepared with titles to suggest for our first selection. I’d brought a selection of perhaps eight recent likely-looking titles for their consideration as well.

We’d gone through such details as date of meeting, publicity efforts, service projects and the like, and the last thing on the agenda was selecting our first title. Students browsed the titles I’d brought, sharing the fun of reading the jackets and discussing possibilities. By the time the meeting ended, three students had taken different books to preview over the weekend, and — even more exciting– had arranged for switching with each other to spread the fun around. The titles previewed were Armstrong’s The Masked Truth, Wallach’s We All Looked Up, DeWitt’s Undermajordomo Minor and Wellington’s Positive. There was a babble of excitement when Book Club ended, with some students heading off to their next event, while others chose to dive into their selected book right away. 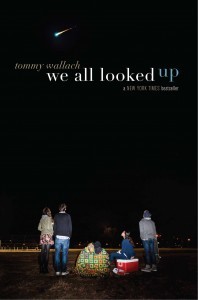 I had taken Wallach’s We All Looked Up, a sort of Breakfast Club for the (possible) Apocalypse. Turns out it is an interesting exploration of four different high school students and how they are affected by the coming of a comet that might or might not wipe out all life on earth in two months. Near the beginning, a teacher asks one of these students, “What is it that makes a book really good?” The answer really struck me as true. “The best books, they don’t talk about things you never thought about before. They talk about things you’d always thought about, but that you didn’t think anyone else had thought about. You read them, and suddenly you’re a little bit less alone in the world. You’re part of this cosmic community of people who’ve thought about this thing, whatever it happens to be. ”

Finding that evocative description of what a ‘good book’ is, I paused in the book, and pondered.  Just now, as I was returning from lunch, one of our book club students passed and asked “Hey, how’s that book?” I said I was almost done and I still didn’t know how it was going to end. He called back “Oh, that’s the best!” This is a perfect example of how Book Club gives us the opportunity to share books even when we aren’t meeting, even with just 20 minute meetings every other week.

One of my tasks before we break for Thanksgiving was to update a powerpoint slide show on how to get digital books– ebooks and audiobooks– from the library. I had a version from nearly a year ago, but needed to update it to be useful now as folks hit the road on their way to family gatherings. I’m glad I reviewed it, as the paths had changed a bit since I’d last edited that document. I continue to be a bit frustrated at the variety of steps required for moving between OverDrive, Kindle, Los Angeles Public Library and my device. I notice differences between LAPL and Pasadena Public Library procedures, and differences between getting a book onto my iPad and onto my laptop. When you’re trying to create a clear standardized ways to get digital media for a presentation that will be shared among all faculty and students, you want to find clear standardized paths– not “sometimes do this” and “sometimes do that”.  But I did manage to cobble together a presentation, and I hope that providing a starting point for this process will be helpful. I was able to download an audio version of Sam Wasson’s Fosse biography to help make a seven hour drive more interesting. Moving between my print edition, ebook and now audio book has made it possible to continue enjoying this fascinating look at Bob Fosse’s astounding career, no matter what format I need. Take a look and let me know — does it work for you? Do you have something similar?

Some of you may have seen this article, “The Future of the Humanities: Reading”, by Michael Dirda, making its way around the AISL listserv recently. Starting off with “Reading always seems to be in crisis”, it explores reading as it has transitioned over the millennia. There are celebrations of the survival of the book in a succession of formats over the ages, and mention of the assist social media can give toward sharing a favorite book or author. In fact, adding that third dimension of social media goes a long way toward making one “part of this cosmic community of people who’ve thought about this thing, whatever it happens to be”,  which was mentioned above as one definition of what a “really good book” does. Dirda mentions a few drawbacks to reading in the digital millennium, including the “Orwellian” concerns of the ease of changing digital text, and the loss of the tactile element of reading a book, and he ends up with the idea that we are living in “what now looks to be print’s golden twilight.” I’m not sure that I would agree that print is heading into the sunset, but I am quite certain that reading is alive and well and looks to remain so for at least the next millennium or two. 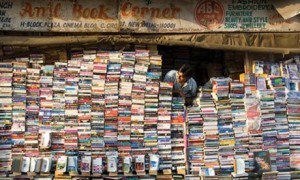 1 thought on “How We Read Today”