This summer our history department chair shared a collaborative document of resources for teaching Social Justice and Multicultural Understanding. I was immediately drawn to the link for Spike Lee’s short documentary, Throw Like a Girl about Mo’Ne Davis. In the summer of 2014, Mo’Ne became the first girl to ever pitch a shutout in the Little League World series. She was the first American girl to play in the Little League World Series since 2004. Even if you never plan to use the film in the classroom, I emphatically encourage everyone to watch the 16 minute profile of this incredibly talented, eloquent, and humble young role model!

Embedded in the document shared by our department chair were resources for utilizing the many links in the classroom. I scoured the internet for other ideas and found the Philadelphia Chapter of the Anti-Defamation League’s unit for teaching about gender stereotypes along with this film.

This idea for a new unit to share with my Fifth Grade students also got me thinking about ways in which I could creatively incorporate the theme of our school’s core values which we were rolling-out for this academic year. The core values are: Be Brave, Authentic, Compassionate, Curious, and Spirited. I had created resource lists of books in our library catalog for our teachers to use that showcase a core value within the theme of each book. And after researching more about Mo’Ne Davis, it was clear that she illustrated each of the core values in all that she has accomplished and embodies. In the film there are many references to Mo’Ne’s attendance at an independent school in Philadelphia, which is a great connection for our girls as well.

We began the unit by drawing pictures of baseball players. You can see from the students work below that not all of them chose to illustrate a male player! We displayed the pictures which were anonymous and then captured the commonalities and differences in our drawn characterizations of the players. This activity helped situate our current understanding and where we had areas to grow our learning. 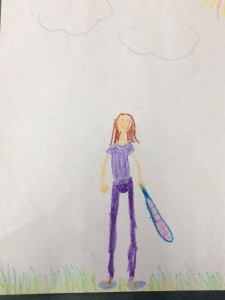 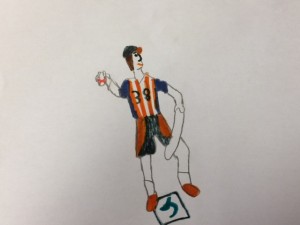 The Fifth Grade students complete a capstone research project at the end of the year which culminates in a five-minute speech for the Lower School. I am fully integrated in this project, and work with the homeroom teachers to prepare the students for their research. As part of this unit on Mo’Ne Davis I sought to actively incorporate the skills students will use later in the year. To that end, I selected articles from the New York Times, CNN, and Time magazine to read and summarize for the class. Resources used for the Fifth Grade speech process typically include multiple formats and this lesson gave students exposure to the news articles most students would use as a source in their speech project. By sharing my rationale for using news articles to learn more about Mo’Ne Davis, I was thrilled to see the students understand my logic and dive in to the readings!

We discussed vocabulary related to the readings and used throughout the film such as stereotype, gender, discrimination, and role model. Our discussions were spirited and we will conclude the unit by viewing Spike Lee’s film: Throw Like a Girl, along with the video: #Likeagirl. The final step in our learning is to throw a baseball and see if we can “throw like a girl” and approximate this young athlete’s incredible speed and location!