This summer, we (Laura Bishop, Maria Falgoust and Maria’s sister, Katie Falgoust) took a two week trip to Guatemala. Like good librarians, we researched, chatted up everyone we knew who has traveled/lived there and gathered information before planning our itinerary. Our primary goal for the trip was to experience Guatemala’s beautiful landscapes and culture, but we also wanted to see and understand some of the realities of life in modern-day Guatemala as well.  Everyone we spoke to (as well as every guide book) emphatically advised us to skip Guatemala City due to the crime and extreme traffic. As a result, we limited our time there; however, we did manage to get a glimpse of what life is like for some in the capital through a visit to Safe Passage (more on that below.)

In order to understand the needs and present conditions of Guatemalan society, it is important to take a look back at their history and understand the forces most strongly affecting the country today. 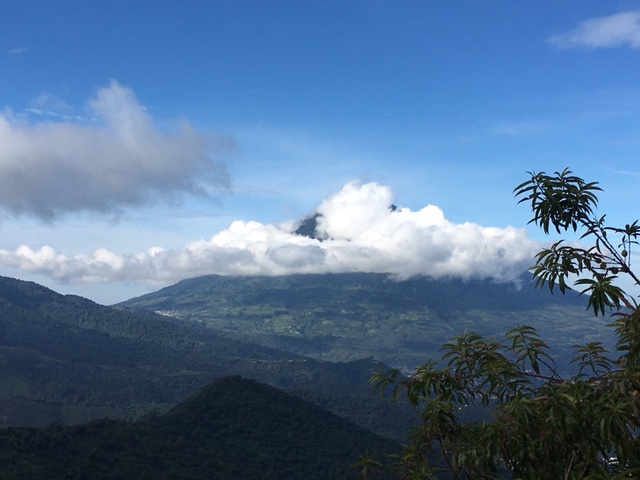 2016 marked the twentieth anniversary of the end of Guatemala’s 36 year civil war. The war began in 1960 with a rebellion that attempted to overthrow the military regime; this regime was installed with help from the CIA six years earlier when it assisted with the overthrow of Guatemala’s democratically elected president who wished to implement land reform largely benefitting the indigenous populations, while compromising the interests of private corporations including that of the United Fruit Company, an American corporation. The conflict disproportionately affected indigenous populations who made up the majority of the over 200,000 killed or “disappeared”.

Along with Honduras and El Salvador, Guatemala completes what has been termed the “Northern Triangle Countries”. Maras, or gangs, are responsible for the vast majority of violent crimes and extortions which plague the country today. Large numbers of Guatemalans have been fleeing their homeland for fear of forced gang initiation, violent crime, extortion, and an overall lack of economic opportunity, including a large number of unaccompanied youth. This number of asylum seekers from the Northern Triangle spiked dramatically between 2000 and 2015. In 2000, the number of people born in those countries was reported at 1.5 million, with that number jumping in 2013 to a reported 2.7 million.

In Guatemala, efforts such as the “Sweep Up” plan have resulted in mass incarceration of gang members, but this has not stemmed the tide of the high incidence of extortion (considered the central source of gang sustenance) since a staggering 80% of extortions are believed to be “commanded” from within the prisons of that country.  The heavy fortifications in some Guatemala City neighborhoods–security checkpoints to enter, and locked, high metal walls barricading the facades of many of the buildings within the neighborhood–stand as a testament to the high rates of crime and increased fear of gangs over the past twenty years.

While numerous crime statistics continue to place Guatemala as one of the countries with the highest rate of violent crime, recent homicide statistics  demonstrate a downward trend and provide hope. In addition, Human Rights Watch notes that the Guatemalan government is making progress with prosecuting human rights and corruption cases. Together Guatemala’s Attorney General and the UN-backed International Commission against Impunity in Guatemala (CICIG), have made important strides in bringing perpetrators of genocide and crimes against humanity during the civil war period to justice. Included in these was the court convictions of two former military officers for sexual violence and domestic and sexual slavery against 15 Maya Q’eqchi’ women. According to Human Rights Watch, this was the first time the Guatemalan courts tried a case of sexual violence related to the civil war conflict.

The CICG–which receives substantial funding from the U.S–has also played a pivotal role in investigating and exposing corruption. One of the most high profile cases being the million dollar tax fraud case involving the country’s then president, Otto Pérez Molina, and led to his arrest and resignation in the fall of 2015.

The Obama administration earmarked $750 million for the Alliance for Prosperity plan for FY 2016. The guiding principle behind the plan is to address the root causes for mass emigration from the Northern Triangle countries, and thus reduce the numbers of undocumented immigrants coming the the U.S. It is subsidized by the foreign aid the U.S. gives to the region and seen by proponents, which include Secretary of State, Rex Tillerson, as a long term solution.

Guatemala is a beautiful, accessible, and traveler-friendly place to visit. Its numerous micro-climates, forests, stellar hiking, and rich Mayan heritage are, unfortunately, often overshadowed by its reputation for crime. Like anywhere one travels to, one should certainly exercise caution, stay alert and be vigilant and street-smart in Guatemala. I’d say we did all of the above, and perhaps that’s why we experienced no troubles in this area!

In both Antigua and Lake Atitlan we found numerous artisan cooperatives. Weaving (back-strap) or textiles, coffee, chocolate, and herbal remedies are just a few examples of the types of enterprises one can find there. Run by women from various indigenous groups, these cooperatives not only produce beautiful examples of Mayan and Guatemalan culture and natural resources, they are symbols of the resilience of the Guatemalan people and an act of cultural preservation.

The needs and challenges  in Guatemala, however, are significant. While we were there, we heard about many non-profits working to improve daily life for Guatemalans. Here we will share two we had the opportunity to visit. 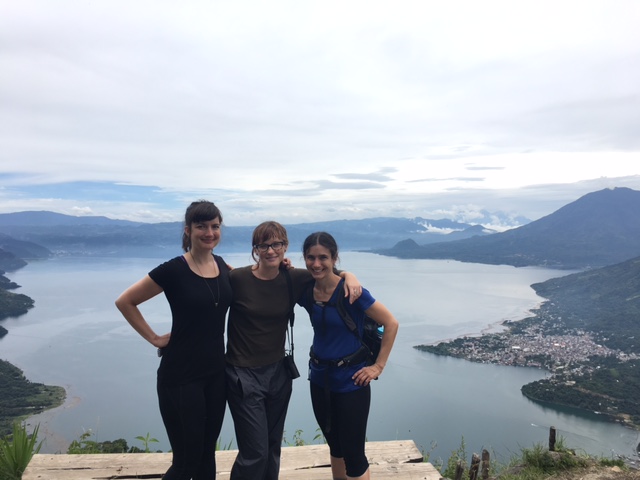 Safe Passage, is a non-profit that focuses on providing education, health care and other programming to some of the 60,000 children and families who work in and around the city’s dump. Watching Leslie Iwerk’s moving documentary, “Recycled Life” about Guatemala City’s toxic landfill and Safe Passage’s work convinced us to check it out.

Leaving at 5 am from our cozy mountain lodge, we happily arrived at Safe Passage where we learned about the history of the founder, Hanley Denning, a native Mainer. In 1999, a friend brought her to see the dump and slums surrounding it. People who couldn’t find steady work would go to the landfill to collect materials to sell for recycling. As big trucks barreled in and out, methane and toxic substances were everywhere, and the workers’ children were exposed to all of it. Hanley felt driven to create a safe place where the children could be children, meaning that they have a safe place to play, learn, eat healthy food and be treated with dignity. She accomplished her dream when she founded Safe Passage later that year. Though Hanley tragically died in a traffic accident in 2007, her vision lives on. Today, Safe Passage serves 500 individuals a year!

On our tour, we had an armed bodyguard with us, in addition to our driver and tour guide. Our first stop was the landfill. As vultures swooped in and out, we stood on a precipice in a city cemetery to see the landfill and learn about everything that goes into it, from toxic hospital waste to household garbage.

Most of Safe Passage’s students live in cramped, squalid and unsanitary, makeshift houses that their families build using materials they find. There is no running water or electricity. Many of the parents are illiterate.

Today, Safe Passage’s campus includes three schools, a community center and an office building. It provides health care, dental care, character education, an expansive well-rounded education, healthy meals and much more. In their schools, committed, certified, local teachers practice a Montessori-style pedagogy. An Expeditionary Learning curriculum is offered as an alternative approach to the style of education offered in most schools in Guatemala, where the focus is on rote learning and memorization.  Teachers at Safe Passage offer care, hope, skills and spark curiosity. In stark contrast to the dump, the courtyards at the schools are thoughtfully designed, meticulously kept and full of flowers and colorful murals. Students are also provided with the essentials they need to attend school: uniforms, school supplies, toothbrushes, toothpaste, and social services. Safe Passage continues to support their students after graduation by paying tuition at a public or private high schools (both cost money) and by providing a variety of support services including tutoring and job fairs. Parents and grandparents also get support in the form of workshops, literacy lessons, education and community fairs.

Visiting Safe Passage (and the library in particular) hit a nerve. It was impossible not to compare the experiences of the children who live in or near the dump to the experiences of the children who attend our independent schools. So much of what we take for granted is non-existent for the children of Safe Passage: access to quality, new books, teaching supplies, databases and general safety. Despite the dramatic differences in resources, the vibe of the classrooms throughout Safe Passage felt very familiar: lots of learning, group work, joy and colorful art work. It was clear that the founder’s vision to create a space where “children could just be children” had become a reality. 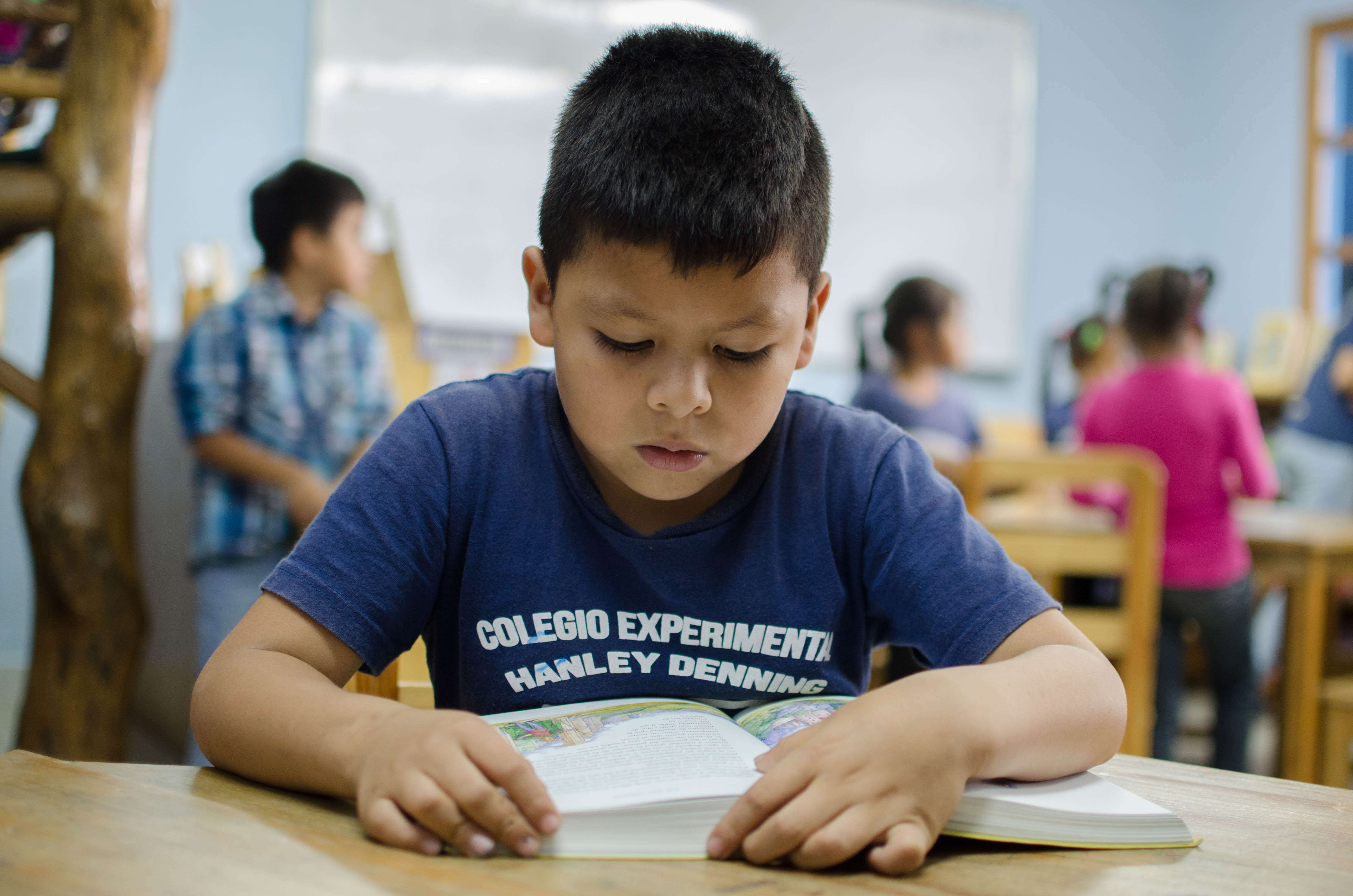 Safe Passage’s library made us see how the AISL community could potentially contribute. Librarian Jessica Marchina gave up an hour to talk with us about the library, which currently holds about 4,000 volumes. As trained and experienced school librarians, we could get a group together to help out with cataloging, processing and even collection development. As connectors, we could potentially inspire other schools to host book drives to boost both Safe Passage’s library and classroom collections. A little goes a long way in Guatemala City!

What you can do to support Safe Passage:

Now we know we are preaching to the choir but quality literature offers us more than just knowledge; it encourages imagination and a respect for a variety of points of views and it gives us  a broader sense of the world and the options it holds.  Your donation of time, effort, books or money could provide these students with hope and change their lives.

~Stay tuned for part two of this blog post on Wednesday, November 29th~

Laura Bishop has been “librarian-ing” for thirteen years now. Previously she was a Senior Children’s Librarian for The New York Public Library, and the Middle and Upper School Librarian at Léman Manhattan Preparatory School. Laura is currently in  her fourth year as the Director of the Library and Media Center at The Hun School of Princeton, where she is fortunate to activate her passions for social justice, travel, and cultural competency work through the Cultural Competency Committee, advisement of the gender equity group, and chaperoning global immersion trips abroad.

Maria Falgoust is the librarian at the International School of Brooklyn (ISB), a Nursery–8th grade independent school in Carroll Gardens, Brooklyn, New York. ISB offers French and Spanish language immersion programs as well as an International Baccalaureate curriculum, which is reflected in their multilingual library collection. Prior to ISB, Maria worked at The American Overseas School of Rome (AOSR) and Saint Ann’s in Brooklyn Heights, NY. She is serving as vice president of the Hudson Valley Library Association (HVLA) for a second term, is an organizer of the Building Bridges Through Books  book club through the Human Rights Pen Pal organization, and is on the planning committee for NYSAIS Education and Information Technology Conference.

2 thoughts on “Guatemala: A Country in Flux, Part 1”