Sara Zoroufy is a junior and the Research Teaching Assistant for the Castilleja School library. Inspired by Nora Murphy’s work on source literacy, Sara chose to spend this year observing research lessons and unpacking how she and other students think about sources. Her work helps inform lesson planning. Here, she shares an idea she has been contemplating recently.

“CNN reports that the Justice Department found the following statistics…”

During a presentation in our tenth grade government class, this phrase caught my attention. Why would a speaker attribute a statistic to two different sources? I have been thinking about this turn of phrase for a long time, trying to understand precisely why it troubled me. Recently, I realized that students struggle to distinguish factual evidence from a source’s analysis of that evidence. In the example above, the student was having trouble determining what type of information she was citing and which source was responsible for the creation of that information. Without separating evidence from analysis, we can neither evaluate nor properly cite a source. I tried to draw a visual to help myself understand how a source breaks down into these components, which culminated in this flowchart: 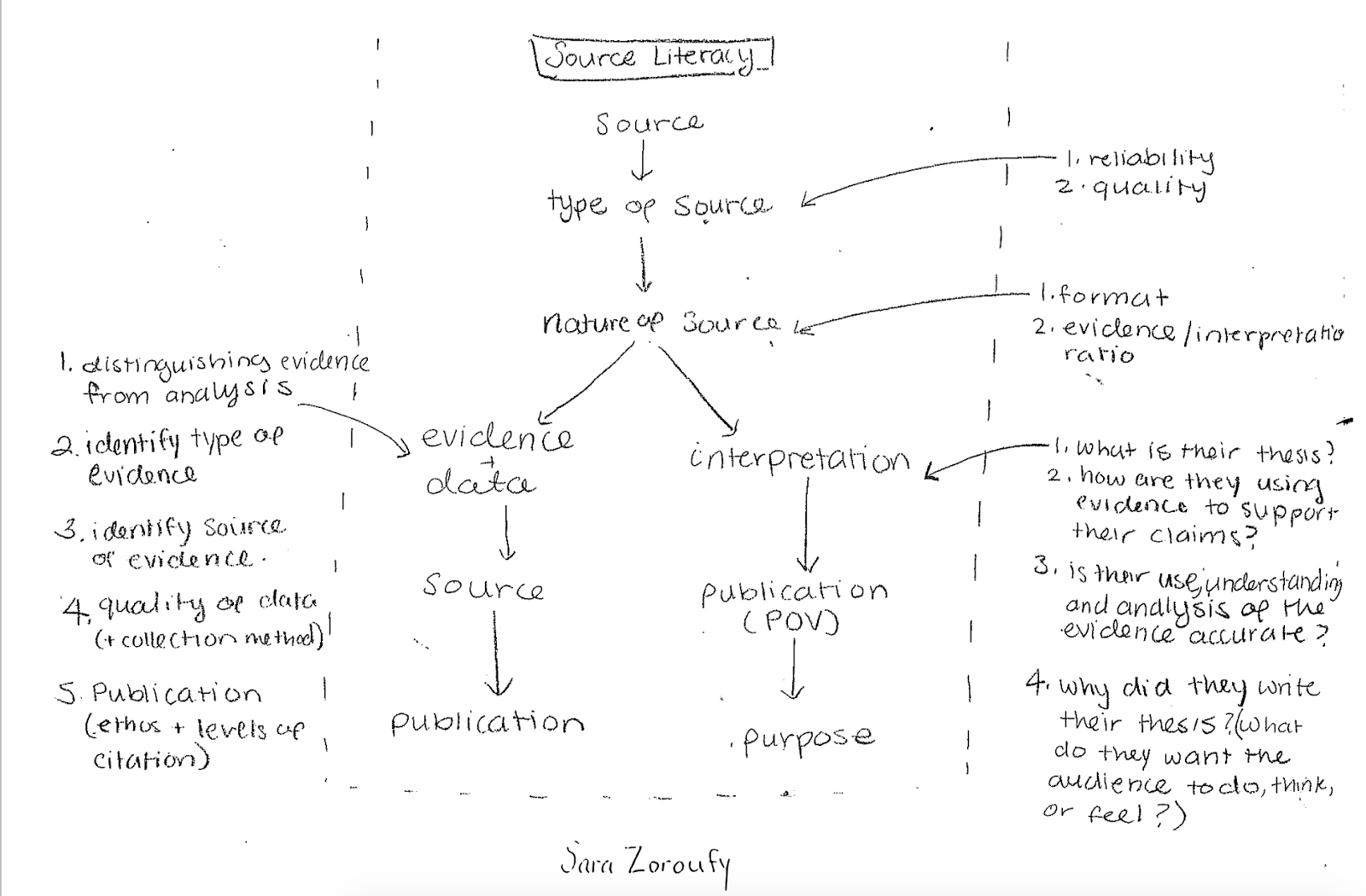 Mapping these concepts in this way helped me identify a number of key points in the process of evaluating a source. I began to think that the essential questions that students should initially ask when faced with a particular source are: what is the evidence that is presented, what is the corresponding analysis, and what sources shaped each component?

Asking these questions is the first step in unpacking a source, and the answers are not always immediately clear when students encounter unfamiliar genres of writing. This year, my grade was presented with an excerpt from a Pulitzer prize winning piece of investigative journalism about the diagnosis of black lung in coal miners. We were asked to identify the sources of the statistics in the article. No one was able to locate this information because journalistic convention dictates integrating the names of sources into the text, as opposed to employing parenthetical citations that students use in their own writing. For example, just prior to starting a bullet pointed list of statistical evidence, the article said, “The Center [for Public Integrity] recorded key information about these cases, analyzed [the medical expert’s] reports and testimony, consulted medical literature and interviewed leading doctors.”[1]  Since the students weren’t accustomed to this particular form of citation, many of us responded that no sources were given.

Students had been instructed to pinpoint the evidence in the article and label it with an “E” and to identify and label its sources with an “S.” As I sat with Tasha Bergson-Michelson, our instructional librarian, and considered my flowchart in relation to the lesson, we realized that the instruction had skipped over several crucial steps in the process of identifying the evidence. This experience made it clear that identifying the sources of evidence can be confusing, and that simply telling students to exercise that skill was not effective. Rather, the development of this skill requires explicit instruction and opportunities to focus on practicing it.

Once we’ve identified the source’s evidence and where it came from, we are able to further evaluate it. Depending on the type of evidence, we can investigate its quality and veracity in different ways–reading the methodology behind a study or poll, for example, or comparing the details of anecdotal evidence across various sources. Another factor to take into consideration is the original publication venue of the evidence itself. Recognizing the background of the publication adds to our understanding of the ethos of the evidence, as well as the sponsor’s motivation for collecting the evidence.

After examining the evidence, we can begin to consider the analysis of that evidence. The analysis reflects the perspective of the author and the publication in which it appears. Often, students stop their investigation into a source once they have determined its bias or perspective, but that is only the beginning. The real importance lies in the source’s purpose–why and how that perspective is being argued. Our history department uses the acronym SOAPA–Subject, Occasion, Author, Purpose, and Audience–to remind us to critically evaluate each aspect of a source.[2] This strategy has been particularly helpful in reminding us to think about the author’s purpose and how it shapes the analysis of their evidence.

I find it useful to think of every source, be it a journal article or a photograph, as an essay that selects and interprets evidence to support its thesis, but that comparison is not necessarily intuitive. This idea that all sources make an argument is easily overlooked, especially when we students are presented with historical documents which we sometimes subconsciously perceive as pure fact. In our 8th grade science classes, students first encounter the idea that nonfiction can be analyzed like literature. The lesson teaches students to consider the language of a source to determine what argument the author is making and what they want the audience to think, feel, or do.

Differentiating between evidence and analysis is the first step in considering the three essential questions: what is the evidence that is presented, what is the corresponding analysis, and what sources shaped each component? Answering these questions helps us understand:

In the case of the quote that started this whole journey, knowing that the evidence came from the Department of Justice and the analysis from CNN allows students to draw on any credibility offered by the DOJ’s statisticians and CNN’s popularity as a source of reporting. The students themselves attain credibility by demonstrating that their thinking is based upon rigorous sources.

4 thoughts on “Distinguishing evidence from analysis: A student’s perspective on the first step in source evaluation”