“No harm’s done to history by making it something
someone would want to read.” David McCullough

Digital Timelines provide interactive ways to engage students with history, and examples abound. From contemporary news overviews, such as the Gender Equality Timeline developed by United Nations Women’s Watch to historic archives of presidential speeches, letters, memos, and photos in the National Archives’ Presidential Timeline, timelines demonstrate how the digital experience of history can be enriched with embedded video and audio, primary source documents that expand for closer inspection, and hyperlinks to resources for further investigation. 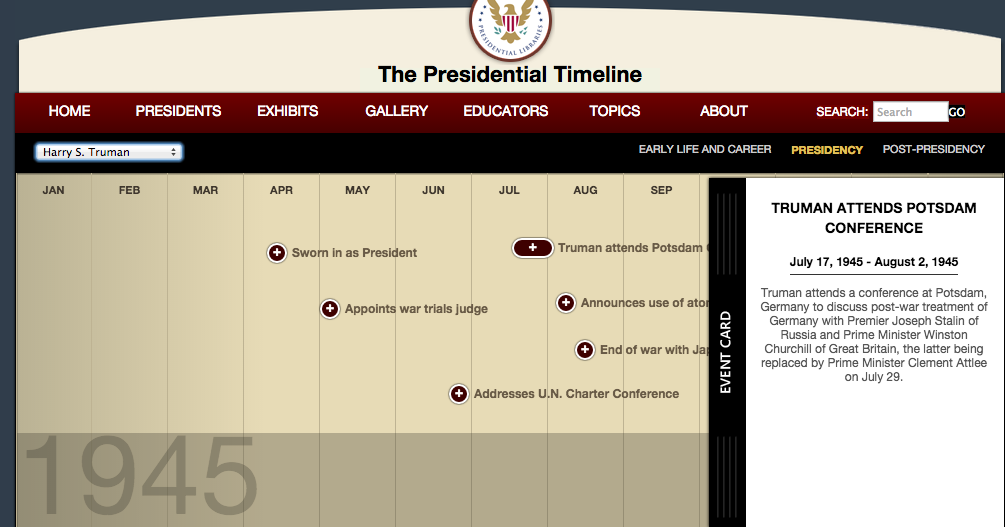 An opportunity to explore digital timelines arose when a concerned Latin teacher at our high school stated that students needed more historic background on key rulers, events, and historians to bring relevance to translations of classical literature. Our social studies department had transitioned away from teaching Ancient Greece and Rome (focused now on Global Issues), so many of the students in this Latin class were last exposed to this history in their 6th or 7th grade curriculum.

In collaboration with the Latin teacher, we identified events and literary historians for students to research and developed a LibGuide of online resources as well as books on classical writers from the library collection. After sampling the merits of several digital timelines, such as Knight Lab and Time Glider, I chose Tiki Toki because it allowed formatting of BC as well as AD events and the paid subscription ($145.00) allowed collaboration—individual students added items to a class timeline. This screenshot shows how students login to collaborate and organize items by color and category, such as Reign, Event, Historian, Quote.

Students were challenged to move beyond assembling a wiki of facts to creating knowledge by 1) analyzing the ruler’s influence on an event (or event on a ruler); 2) identifying traits of the classical writer; and 3) demonstrating how these traits were reflected in their historic writings. The essential question:

Students use the historic voice of the classical historian to illustrate the identity of Ancient Rome (or the idealized identity of Ancient Rome).  Below is a screenshot of the GoogleDoc template for student note taking. In this sample, the student noted that the historian Lucan “had powerful contacts within the Roman empire” and in the “Quote” column, the student used a portion of Lucan’s historic account of the Civil Wars, referring to “Rome’s high race.” This student then evaluated Lucan’s writings for bias toward high-ranking officials and noble classes. 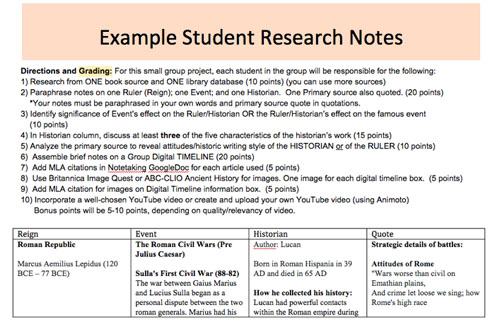 Sometimes students’ investigations led to building connections (historic empathy).  One student discussed the Twelve Tables of Law and made the connection that as these laws were created to define and protect basic human rights, it could be linked to the idea of America defining basic rights in the Declaration of Independence. (See Twelve Tables of Law screenshot.)  However, another student evaluated the Twelve Tables Law on theft and commented that slaves were not treated equally in the law (slaves who were arrested as thieves would be brutally beaten and then hurled from a rock)—leading to further connections with America’s history of unequal treatment for certain groups. 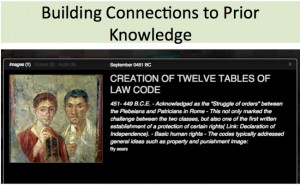 Students were proud of the timelines and during class presentations they often commented, “Remember when we read…well this is the event/person they were discussing.” Other students asked, “Will we be able to access these timelines?” With a resounding “yes,” we discussed how they had created a valuable learning tool for their class and for future Latin classes. Students experienced the satisfaction of knowledge creation, which is a hallmark of becoming a 21st century learner.  Brian Mathews, The Ubiquitous Librarian blogger for the Chronicle of Higher Education, describes the importance of knowledge creation in his blog “What it Takes to Become a Scholar.”  Mathews describes that the transition from student to scholar happens when a student realizes they have created something new: “The knowledge-creation activity plays into the sense of identity. The overriding theme is that one does not become a ‘scholar’ until they have created something new.”

Students’ research time was limited (2 ½ class days), so the added media component was often a YouTube clip posted by History Channel or a short informational movie developed and posted on YouTube by a student (from another US school). Wishing to enrich these timelines with student-created content, we plan to challenge next year’s students to produce their own media content and embed it on the assembled timelines.

Our US History teachers were excited by this idea and adapted it to a 20th century timeline project in which students illustrated key events/people/ideas of the Civil Rights era, Cold War, and Cultural events of the 60s, 70s, etc. (View a sample Space Race event I developed for the US History class.) We also tweaked the location of citations by using the smaller text format of the “Information Box” on the timeline.

This digital timeline project tested the possibilities of how to use historic voices to identify a group of people. However, other educators suggest going beyond a linear timeline—a linear thinking of history–to incorporate multiple perspectives. If your school subscribes to The History Teacher, I encourage you to read this journal article:

Ms. Denial describes how she challenged her undergraduate students to consider that there is “more than one way to perceive and make order from the past” (418).  Her students devised models of non-linear timelines, such as fabric quilts, that demonstrate how a historian creates a perspective on the past through the selection of certain events, voices, and ideas.

Another idea to engage students in a discussion of historic timelines is to use novels such as Alias Grace by Margaret Atwood and The Invention of Wings by Sue Monk Kidd; both stories feature characters who use quilts to order a historic narrative.

Please share your experiences with timelines or titles of fictional works that explore historic voices and multiple perspectives of history.