I love doing bulletin boards. Really. They’re kind of my zen exercise. There’s just something about getting to do grown-up Arts N’ Crafts while being paid that I just find too wonderful to be believed. A rewarding rush of “Oh hey, this is my life. Sweet.”

And sometimes, there’s glitter glue. Really, who can turn down the chance to play with glitter glue?

Last September, we opened up our new Middle Division Reading Room, in search of a library space that our 6-8th graders could call their own. Featuring middle-grade lit, laptops, and these bean bag chairs that make 12 year-old-me want to take a running leap, it’s a cozier, smaller version of the attached main library, and it’s just for them.

And, bonus: with four bulletin board spaces and huge blank walls, it’s got lots, and lots of space for us to hang stuff up.

My keywords for doing a board are “cheap, quick, and interactive.” Cheap and quick because, well, who doesn’t love saving money and time.  And an interactive board not only makes your display more interesting and effective, but it saves you massive amounts of time. A board that gives your student a chance to write or draw and interact with it is engaging them in conversation, and you only have to carry half of a conversation. Ask your kids a question (“Favorite banned book” “Summer plans” “Ultimate YA Crossover Match-Up?”), post up some pens, and let them fill in the rest.

Since it was September, I felt back on that old chestnut “What Did You Do This Summer?” And because he’s never out of style– a Mario themed display. A Mario themed display where kids could write what they had spent their summers doing, and share stories of good times with each other. It’d be a nice pop of color on the beige walls, it’d be fun to make, and all the pixelated shapes would be easy and quick to cut out.

My generation grew up looking to “Captain Planet,” because he’s a hero and he’s gonna take pollution down to zero. So recycling materials from one board to another board is an absolute must; it’s like a neurotic birthday party when I take them down, desperately peeling tape away from paper and cringing at small tears. I had a long piece of blue construction paper, originally from last year’s Mock Newbery display. I flipped it over, turned it horizontal, and tada! Instant Nintendo-blue sky and board backing.

The color printer could provide details (question blocks, Mario himself) but the blocks on the ground required a shopping trip. And where better to get supplies than the local dollar store.

Dollar store shopping is awesome because a) why spend money when you could use that money elsewhere? There’s always an “elsewhere.” And b) going shopping in a dollar or variety or party supply store expose you to so many things that you can use for a board that aren’t normally considered art supplies. Oak tag? Psh. That’s for posters; displays should be avant-garde.

At my dollar store, I found:

The tablecloth had texture, color, and depth. I added a quick brick pattern with my Sharpie, cut out the sections I needed, and huzzah! Ground!

All I needed now were details. Using Pixisnap, I pieced together a mosaicked image of Mario using our Summer Reading book covers. Boom– print it in color, back it on oak tag so the paper doesn’t curl, and cut away. Same deal for Mario’s iconic Question block. The Goombas (angry walking-mushroom guys) and Koopas (turtle dudes) were recycled construction and scrap paper, no more than one sheet of each color.

Letting the kids write on the display with their own pens and markers just seemed like asking for trouble, but having a cup of pencils or pens sitting on the counter did, too. Our supply cabinet yielded a small, surprisingly thin manila envelope; mounted to construction paper, it made the perfect hanging-holder. After about twenty seconds of staring at it, I realize that putting the “Take Pens from Here” pouch on a part of the display itself was a terrible, “hey, let me take a pen like a middle schooler woul— RIIIIIIIPPPPPP”-idea and moved it over to the wall next to the display.

Stealing a piece of chalk from the math department, I wrote a quick life/level/coins count at the top of the display, and it was done. Finished. Alive. 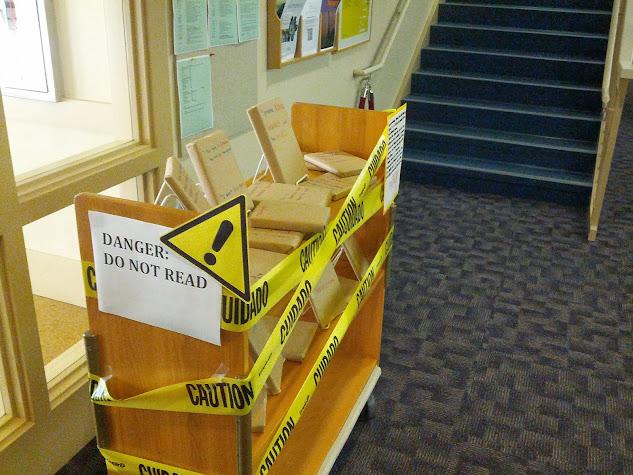 All in all, the dollar store trip cost me $8.46 and helped with three displays. With two pairs of hands and five minutes of work, and the black shower curtains became display paper for a Banned Books Week board. We shredded the cellophane and twisted it into flames to lick at the banned and burning literature floating above in a sooty black sky. The butcher paper was used for an upper division display of Blind Date with a Banned Book, with scintillating hints written on the wrapped titles as to what would be so awful that the book needed to be wrapped in plain brown paper. 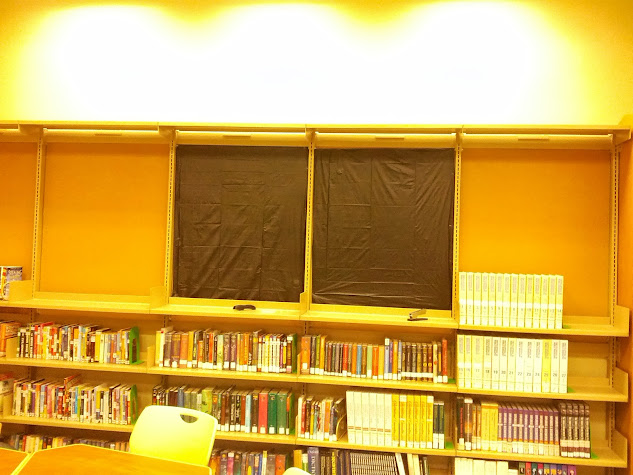 And when we were ready for our next board, we were able to leave up/save/reuse:

*the black shower curtains– much more durable than paper, and shows no dirt/hand smudges

*the pen pouch on the Mario display

Now I just need to find a way to reuse those plastic 6 ring soda can holders for something and I will have totally earned that Planeteer ring.