In the board survey this spring, there was a request for more book recommendations on the blog. While it’s always fun to think about reading by the beach over the summer, it’s also when we might have more time to delve into professional books. Each year, my school requires a professional read for faculty, and while these have been fine, none have been overtly influential. I thought carefully, and mined my Goodreads shelf, and here are the five books library management/education/productivity books that have made the biggest difference in how I teach and organize the library on a day-to-day basis. They’re not new or flashy, but they have for me been “the right books in the right hands at the right time.” Perhaps they’ll do the same for you, or I’d love to hear your selections below! 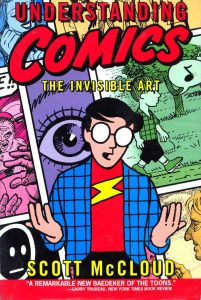 We do a lesson on visual analysis with the AP Lang students and show selections from McCloud’s Ted talk (https://www.ted.com/talks/scott_mccloud_on_comics?language=en). They are teens, so they immediately notice that he’s a lot older now than when he wrote this book. But then they settle down to listening to his message. I think the first graphic novel I read was Lynda Barry’s What it Is when I was in library school, and I honestly didn’t know how to parse the visuals and text. McCloud demystifies the genre, sharing its history and common conventions in graphic novel format. I’ve realized that my facility and speed with print does not translate to the visual realm, and some of my students are more adept at picking up the nuances than I am. It’s been helpful in understanding how comics work and for convincing teachers to take them seriously. As culture today becomes more and more visual, this book shares insights that translate to human psychology and marketing. 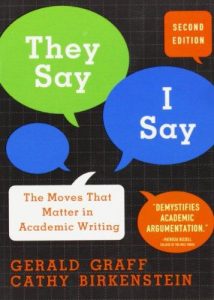 They Say/I Say: The Moves that Matter in Academic Writing by Gerald Graff and Cathy Birkenstein (2006)

I may have bought a copy of this book and read it before cataloging, at which point I may have handed it to the English department chair who immediately made it his own and included it in the AP writing curriculum. Though written by teachers at community college, there is tremendous applicability for high school writing assignments. It’s also a teeny-tiny book, full of writing templates. The writers’ premise is that students are often entering a conversation when they begin writing, and they need to recognize their position in respect to what has already been said. The structure of a template isn’t confining but instead encourages students to be more creative and original as they are learning writing skills. This book probably isn’t groundbreaking, but it is accessible for both teachers and students as they work to improve their writing. 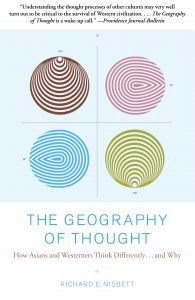 The Geography of Thought: How Asians and Westerners Think Differently…and Why by Richard Nisbett (2003)

This is a book written by a psychologist, and it isn’t specifically focused on education, but it approached an idea that was new to me: that the way we physically view the world is not universal but is strongly culturally dependent. The way that this is presented is not obvious as it might seem from that summary and begins with Ancient Greek and Confucian philosophies and carries through to present-day child rearing and business transactions.  The author is an academic who draws heavily on his own research: http://www.pnas.org/content/100/19/11163.full to deeply explore notions of attention, independence and cognition. The idea of Western independence compared to Eastern interdependence recurs throughout the book, starting from Western children learning nouns first while Eastern children learn verbs first, emphasizing the interconnectedness of items that they are taught from birth. I work in a multicultural school, and reading the ways that some of my students may see what I present in different ways was helpful to me. 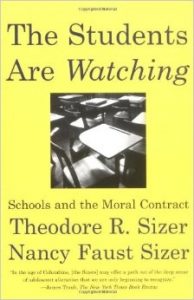 The Students are Watching: Schools and the Moral Contract by Nancy and Ted Sizer (2000)

This was the first book I read from the Sizer family, and the main idea is timeless. It’s about the growth that we want to see in our students, not in knowledge, which is covered in many other books, but in morality, ie. character. Unlike They Say/I Say, there are no templates here, just a thoughtful contemplation about the ways that schools are set up and the structure of the school day. This book looks at informal teaching and the ways teachers model the behaviors they expect (or don’t) throughout all their interactions with students. Students look up to us as examples, and they don’t stop paying attention the second the bell rings. The authors believe that relationships are important in schools, and that getting to know students makes a huge difference in what we are able to teach. As independent school librarians, I think we’ll all agree. One of the main reasons that I work in a school is my ability to get to know the students personally and having the chance to help them navigate the confusion of teenagerness to end up as confident and caring adults. This book gave me specific strategies for doing that. 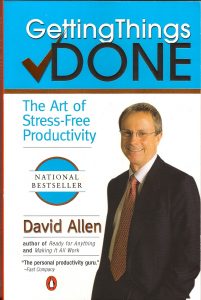 Getting Things Done: The Art of Stress-Free Productivity by David Allen (2001)

I read this book at the recommendation of a friend in grad school, and it’s a sneaky bugger. I didn’t know until a Wired article this year that there’s a whole GTD community on the web. Frankly, at the time I thought the book was similar to many self-help/organizational books, repetitive and self-evident. But Allen tugged at my mind with his accurate diagnosis of the items keeping me from being as productive as I had hoped. Allen has a process for everything, outsourcing the nagging section of your brain. Wikipedia, at this writing, has a good overview, and I’ll try to trim it down even further. I don’t follow everything and my inbox is never at zero, but these are the direct changes that have definitely amped my productivity.

-Break your “to do” list into next steps. If you are hung up on a specific step, write that step down exactly as it’s hanging you up. Inventory is not an actionable item. For me, the tasks went something along the lines of:
1. Find inventory netbook and get it updated.
2. Start inventory in Follett.
3. Create circulation type .rtf files.
4. Scan fiction, Scan 900s, etc and front the shelves as I scan…
If you take nothing from this book except this, this advice can be targeted specifically to help struggling students. Too often, they think the next step is “write research paper.” It never is.
-If a task is not complete but you are waiting for a step from another person, put the action you are “waiting for” on a separate list. You won’t forget it, and you know the status of item in question.
-Don’t put something on your calendar unless it needs to be done that day. All else is added to the “to do” list where it best fits.
-Ideas and big picture items go into the “someday/maybe” file. This is my personal Pinterest for ideas I want to keep for the indefinite future. Set a reminder to review these items if you’re worried you’ll forget about them.

Like many librarians, I love to talk about books. Rather than standing up on a podium and talking about books that have influenced me, I want to follow Katie’s lead. Do any readers have thoughts on the books I’ve mentioned or suggestions of their own? It’s tough not to ramble while summarizing several thousand pages of texts into five paragraphs, so let’s continue the conversation below.